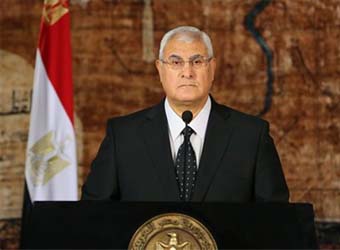 Mansour asked the cabinet to put the proposed bill up for debate and to look into recommendations from social and political forces before it is ratified, according to the president’s constitutional advisor Awad Saleh.

The new legislation, approved by the cabinet on 3 April, was drafted by the justice ministry and revised by the state council following months of discussions concerning a rise in militant attacks against army and police troops.

It was then sent to Mansour for ratification.

The law is reported to amend terrorism clauses in Egypt’s penal code and stipulate harsher penalties for terrorism-related crimes.

Egypt has seen a spike in terrorist attacks on security installations and personnel since the ouster of president Mohamed Morsi.

The attacks, which initially began in the restive Sinai Peninsula, have eventually spread across several governorates, including the capital.

Interim authorities have blamed Morsi’s Muslim Brotherhood and their Islamist allies for orchestrating the violence and plotting against the country. However, the Islamist groups have frequently denied any links to the violence, affirming their commitment to peaceful opposition.

The Brotherhood was designated a terrorist group in December 2013 and all its activities were banned.