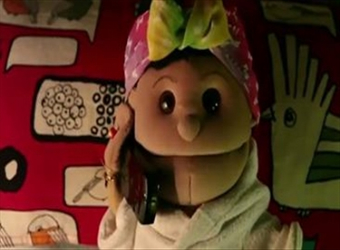 Prosecutors have questioned officials in one of Egypt’s largest telecommunications companies over an online advertisement featuring a puppet, which a controversial blogger has accused of delivering a coded message linked to the Muslim Brotherhood group, the company said Wednesday.

Ahmed “Spider,” a self-style youth activist known as a strong supporter of ousted President Hosni Mubarak, says code about an upcoming attack is included in the details of the puppet ad.

Fahita and her daughter Karkoura search for her deceased’s husband sim card, while explaining to her friend over the phone about another character “Mama Touta.” In the background, a radio anchor explains how to make “stuffed turkey” for Christmas while sitting next to a cactus from which ball ornaments were dangling. She says she asked the building guards to get a sniffer dog of a shopping mall to search for missing things and gets money in return.

Spider explained the alleged code on the Al-Tahrir network on Tuesday night: the mall and the dog refer to the planned site of the attack, and “Mama Touta” is the Brotherhood’s secret name.

“The dog, garage, guard, mall and next to us these are elements tell us that there will be a big mall and an explosion after a dog . fails to find the bomb in a car,” Spider said. He said he filed a complaint with Egypt’s prosecutor general who referred it to state security prosecutors, who handle terrorism and other political allegations.

His lawyer told another TV network, el-Faraeen, that an ornament on the cactus refers to the bomb. The cactus has four branches referring to Muslim Brotherhood group’s Rabaah sign, commemorating the victims of a deadly crackdown on a protest camp held next to Rabaah el-Adawiya mosque in eastern Cairo. Rabaah is Arabic for “fourth” and is also a name.

A statement by Vodafone said that the prosecutors summoned the company representatives and asked about the accusations, but didn’t make any accusations themselves.

It described the accusations as “irrational.” It said that the advertisement is only for “marketing aiming at explaining how to reactivate a Vodafone sim card and attract audience to the product.”

“The advertisement carries no other meaning . and any other interpretation other than that is mere imagination or personal opinion of some of the audience,” the statement sent to The Associated Press read.

Egypt has cracked down heavily on the Brotherhood since the July 3 coup that toppled President Mohammed Morsi, who hails from the group, following demonstrations by millions calling on him to leave office.

The crackdown has recently expanded to include secular activists who opposed the Brotherhood. Critics say the authorities are trying to stifle all dissent.

The government’s defenders have often alluded to foreign plots against the state, leading to what some activists call an atmosphere of spy hysteria.

In August, police in southern Egypt detained a migratory stork that a citizen suspected of being a spy. The electronic device attached to it however turned out to be a wildlife tracker.

Also in 2013, a security guard filed a police report after capturing a pigeon he said carried microfilm. A previous rumor in 2010 blamed a series of shark attacks along Egypt’s Mediterranean coast on an Israeli plot. It wasn’t.

Egypt has seen a series of recent bomb attacks, including a suicide bombing of a security headquarters last month that left 16 dead in a Nile Delta city. That was claimed by Ansar Beit al-Maqdis, or Champions of Jerusalem, an al-Qaida-inspired group based in the restive Sinai Peninsula.

The Interior Ministry announced Wednesday that eight police vehicles’ registration plates have been reported stolen by “terrorist affiliated groups,” warning that they might be used in attacks against vital institutions and police installations.

Khartoum to Host New Round of Nile Dam Talks on Saturday

UK Has Not Blacklisted Brotherhood, Ready to Hear ‘Terrorism’ Evidence