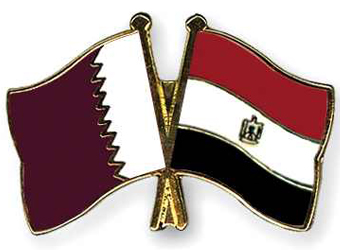 Egyptian and Qatari intelligence officials have met to arrange talks between leaders of the two countries to end a row over the ouster of President Mohamed Morsi, a diplomatic source said Wednesday.

The planned summit is part of reconciliation efforts brokered by Saudi Arabia after Qatar this month pledged its “full support” for Egypt.

Qatar’s earlier backing of Morsi and his blacklisted Muslim Brotherhood movement left it isolated in the region.

“Talks are under way to organise a meeting between the Egyptian president and the emir of Qatar,” an Arab diplomatic source told AFP.

“The talks took place in Cairo over the past two days between the head of Qatari intelligence and his Egyptian counterpart for arranging such a meeting in Riyadh.”

He said there was a possibility that a meeting between President Abdel Fattah al-Sisi and Qatar’s Emir Sheikh Tamim bin Hamad al-Thani “could be held on Sisi’s way back from China”.

Sisi, who overthrew Morsi in July last year, is expected to return from China on Wednesday after a two-day trip.

A foreign ministry official when contacted said he had no idea that intelligence officials of the two countries had met in Cairo.

Ties between Cairo and Doha deteriorated after then-army chief Sisi toppled Morsi, whose Muslim Brotherhood movement was backed by Qatar.

Since Morsi’s ouster, a crackdown overseen by Sisi against the Brotherhood has left hundreds dead.

Qatar repeatedly denounced Sisi’s overthrow of Morsi and it still provides shelter for some Brotherhood leaders who fled Egypt.

The crackdown led to a diplomatic spat pitting Qatar against Saudi Arabia, the United Arab Emirates (UAE) and Bahrain, which all supported the ouster of the Islamist president.

But at a regional summit in November hosted by Riyadh, Qatar joined its Gulf neighbours in supporting Egypt under Sisi.

“Egypt looks forward to a new era that ends past disagreements,” Sisi’s office said after he held a meeting with a special envoy of Qatar’s emir on Saturday — his first with a Doha representative since becoming president in June.

The Qatari envoy was accompanied by a special representative of Saudi King Abdullah.

Ties between Cairo and Doha had also soured after Egyptian authorities jailed three al-Jazeera reporters, accusing them of biased reporting and aiding the Muslim Brotherhood.