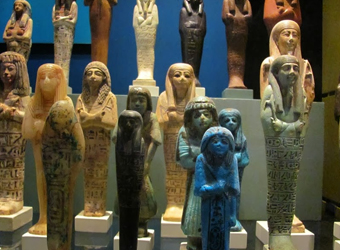 Egypt has received 340 artefacts that had been smuggled out of the country and intercepted by Jordanian customs last year, the antiquities ministry said.

“The artefacts, which include stone statues and ancient coins, will be sent to the Egyptian Museum’s depot for renovation,” said Shaaban Abdel Gawad, who heads the ministry’s antiquities repatriation department.

The recovered collection also includes a large alabaster bust of Alexander the Great and several limestone statues, he added.

Jordanian authorities had informed Egypt in late 2015 that the smuggled artefacts were discovered in a coal shipment coming from the Red Sea port of Nuweiba, according to Abdel Gawad.

It was unclear if the artefacts were stolen from Egyptian museums or illegally excavated.

Egypt and Jordan signed in 2015 a joint cooperation agreement to conserve and recover stolen cultural properties and combat illegal trade in artefacts.

Since the start of 2015, items have also been repatriated from countries including the US, Belgium, Germany, France, Switzerland, Israel and the UK.

Earlier this month, the US returned to Egypt five illegally smuggled ancient artefacts, including an 8th century mummy’s hand used as a science-fiction movie prop.

The US has repatriated 80 items, including a nesting sarcophagus found in a Brooklyn garage, a funerary boat model, ancient coins, and a series of finely carved limestone reliefs from an Egyptian temple returned to the Land of the Pharaohs since 2007.

In May, Israel’s antiquities authorities handed over to Egypt two sarcophagus lids – one dated to between the 16th and 14th centuries BC and the other between the 10th and 8th – it said had been illegally imported after they were smuggled out of their homeland through a third country.

Earlier this year, France repatriated 44 artefacts to Egypt, including a limestone busk of a woman, Coptic crosses, and wooden hand clappers used as percussive instruments.

Last year, Zahi Hawass, the former head of the Egyptian ministry of antiquities under Hosni Mubarak, claimed that thousands of artefacts had been looted from Egyptian museums and heritage locations during the 2011 revolution.

His claim was confirmed by a study published earlier this year in the journal Antiquity, which recorded a surge in the looting of Egypt’s historical sites amid the chaos that has followed the revolution in 2011

Publishing her findings in the journal Antiquity, “space archaeologist” Sarah Parcak, an associate professor of anthropology at the University of Alabama, has examined satellite images of huge excavations left in the ground in recent years by tomb-robbers.

“The number of looting pits dug during 2009 and 2010 is, in our opinion, simply staggering,” the study said.

Once items of historical value are stolen, they often end up on the black market for tourists and collectors around the world. From coffins to monumental stones, and even the embalmed bodies of mummies, looters have removed a broad range of historical items from their sites in order to make a profit.