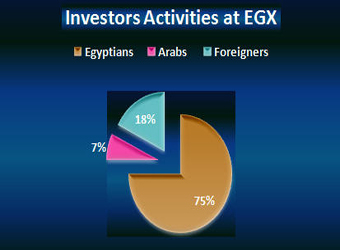 The Egyptian Exchange’s indices were wavering in green notes during the midday session of Thursday.

Also during the midday session, 179 listed securities have been traded in; 31 fell, 134 advanced; while 14 keeping their previous levels.

The non-Arab foreigners were net buyers acquiring 17.66% of the total market, with a net equity of EGP 18.145 million, excluding the deals.

On the contrary, Egyptians and Arabs were net sellers seizing 75.04% and 7.3% respectively of the total markets, with a net equity of 8.072 million and 10.072 million respectively, excluding the deals.