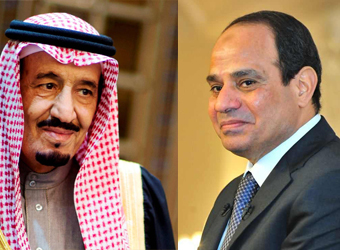 Share
Egypt’s President Abdel Fattah al-Sisi has said his administration is not interfering with the judicial and parliamentary review of a controversial deal to transfer two Red Sea islands under Egyptian control to Saudi Arabia.

Speaking at a youth conference on Wednesday, the president said he would never compromise his country’s interests to court others, in reference to criticism that his government had sold the strategic islands in return for the financial backing of Saudi Arabia.

“I cannot compliment others at the expense of even a metre of our lands,” the president told a crowd of around a thousand young people in the Suez Canal city of Ismailiya, according to state news agency MENA.

“The matter is being addressed before the parliament and judiciary; we do not interfere,” he further added.

The government approved a deal to hand over the islands of Tiran and Sanafir to the Gulf kingdom in December. A month later, Egypt’s High Administrative Court rejected the deal in a final ruling, affirming that the islands belonged to Egypt alone and that the cabinet had not provided sufficient evidence to prove otherwise.

Despite the annulment, Egypt’s parliament proceeded to discuss the accord, in a move considered by some observers as unconstitutional.

The Cabinet, which said it would provide the parliament with all necessary documents on the sovereignty status of the two islands as they discuss the agreement, has appealed the annulment ruling and filed cases arguing that the court which issued the verdict has no jurisdiction in matters related to sovereignty.

The agreement, which was announced during a visit to Egypt by the Saudi king last April, prompted some protests, with opponents accusing the government of selling the country’s sovereign territory.

The cabinet, however, insists that the islands have always belonged to Saudi Arabia and were only placed under Egypt’s control because Riyadh had asked Cairo to protect them in the 1950s.

Khaled Ali, a prominent Egyptian rights lawyer who challenged the deal in court, said that Egypt’s ownership of the islands dates back to a treaty signed with the Ottoman Empire in 1906, before the founding of Saudi Arabia.