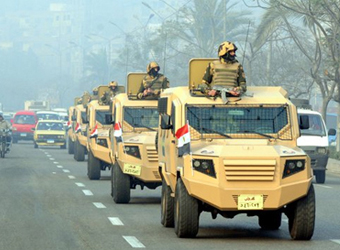 Five militants were killed in an army raid in North Sinai including a leading member of Ansar Beit Al-Maqdis, an Egyptian army spokesman announced on Sunday.

The army’s statement did not name the Ansar Beit Al-Maqdis leader or provide any further information on the militants killed. A picture was posted with the statement, showing what appears to be the body of a dead man with an assault rifle.

Ansar Beit Al-Maqdis has claimed responsibility for most of the attacks against security personnel and installations in North Sinai.

The group, which originated in Sinai, pledged allegiance to the Islamic State group and its leader, Abu Bakr El-Baghdadi, last year.

Egypt’s army and police forces have been waging a war, which has intensified over the past three years, against an Islamist militant insurgency in North Sinai that has seen hundreds of security personnel killed, as well as hundreds of militants killed in security campaigns.

Erdogan says would be easier if EU rejects Turkey bid