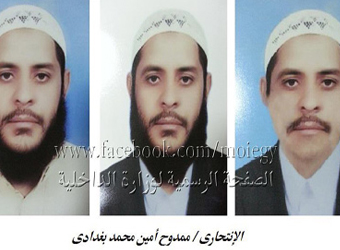 Egypt’s Ministry of Interior identified in a statement on Thursday Mamdouh Mohamed Baghdadi as the suicide bomber responsible for Sunday’s attack on Tanta’s Mar Girgis Cathedral that killed 29 people.

The ministry said that Baghdadi, who is from Upper Egypt’s Qena, was identified using CCTV footage and DNA testing.

Baghdadi was a member of a terrorist cell led by a fugitive militant named Amr Saad Abbas, who also trained the suicide bomber who attacked Alexandria’s Street. Mark’s Cathedral on the same day of the Tanta bombing, according to the statement.

The ministry also raised a reward from 100,000 Egyptian pounds 500,000 pounds for information on 19 individuals it identified a day earlier who are suspected of involvement in the two church bombings.

The ministry’s statement added that Baghdadi was also involved in an attack in January on a police checkpoint in the New Valley that killed eight policemen.

The interior ministry’s Thursday statement also said that three people involved in terrorism-related crimes have been arrested in Qena, without elaborating.

The Islamic State militant group has claimed responsibility for the suicide bombings of the Alexandria and Tanta churches, which killed 46 people and injured dozens more.