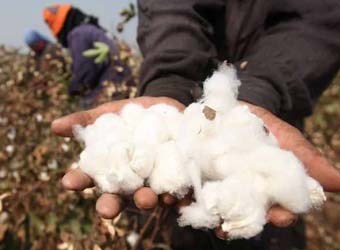 It attributed the drop to a decline in the area of cultivated cotton. In its quarterly report on cotton, CAPMAS said that India came as the top country importing Egyptian cotton, with almost 36,000 qantar, representing 41.5 percent of Egypt’s exports in the period between June and August 2017.

The report further revealed that total consumption of domestic cotton stood at 43,000 qantar in the period between June and August 2017, compared to some 118,000 qantar last year, representing a 62.8 percent decrease. Egypt aims to double production of its most famous crop, after a period of slumping output, Agriculture Ministry spokesman Hamed Abdel-Dayem told Reuters in July.

He said that production should rise to 1.4 million qintar within the financial year 2017/2018 from 700,000 qintar a year earlier. All the cotton will be exported.

In July, Egyptian President Abdel Fattah al-Sisi held a meeting with the Prime Minister as well as the ministers of agriculture and trade and the public enterprise sector in order to discuss ways of boosting the cotton industry.

Egyptian cotton is world famous for its high quality for its long fibers that produce a light durable fabric with a soft touch.

According to Trade Ministry’s data, the textile and spinning industry contributes with up to 26.4 percent to industrial production.