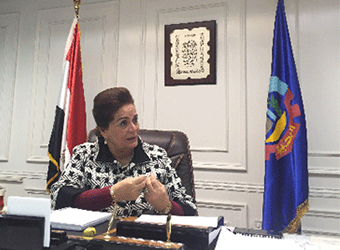 Three days have passed since the swearing in of five new Egyptian governors, with Beheira’s Nadia Abdo appointed as Egypt’s first female governor.

Although Abdo’s post as the governor is only two working days old, she is well seasoned for the position, having served as the deputy governor since 2013 under the newly-transferred governor to Alexandria Mohamed Soltan and his predecessor.

“My job as deputy governor for three years has meant that I know the internal workings of Beheira governorate. I was tasked with several primary responsibilities in the governorate,” Abdo said in an interview with Ahram Online

Abdo’s expertise not only comes from her political career, but more importantly from heading the Alexandria Water Company from 1992-2002.

“I dealt with approximately 10 million people as part of my leading position in the Alexandria Water Company, not only in Alexandria, but also in Marsa Matrouh governorate, the North Coast and a third of Beheira governorate.”

Abdo stresses that it is the skills she acquired during her work in the company that she strives to put to use.

She saidthat these skills include the management of a key natural resource and being capable of communicating with different sectors of society.

“These achievements should be the focus of the media, as opposed to stressing on the fact that I am the first female to take up the post.”

Over the past three days, some in the media have questioned a woman’s competence in holding the post of governor.

“I honestly have not personally experienced nor heard people in Beheira making such statements. I see no truth to them,” Abdo added, challenging the notion that Beheira’s majority-rural community is less socially progressive than other parts of Egypt.

Nevertheless, the position of governor being held by a woman has been the subject of jokes since Abdo’s appointment, including jokes about how to refer to her official position since there is no female version of the word “governor” in Egyptian vernacular.

Much of the criticism Abdo has received is not gender-based, however, but is rather due to her former position as a member of former president Hosni Mubarak’s now-defunct National Democratic Party (NDP).

“I will not deny that when I first came in as deputy to the governor of Beheira in 2013, many from the political opposition rejected me because I was a member of the NDP,” she said, though she asserts that “three quarters of Egypt was NDP at the time of Mubarak.”

Abdo says that despite her membership in the NDP, “I never took anything in return while in the party, nor did I ever practice nepotism or purchase property or land illegally,” she further stated.

Abdo faces a big job in governing Beheira, a Nile Delta governorate 200 kilometres north of Cairo that is double the size of Alexandria governorate.

Beheira is not only large, at approximately 10,000 square kilometres, but also includes a diversity of natural resources.

Abdo reflects on the characteristics of Beheira, primarily in regards to its size and natural resources, as both present significant challenges in administering the province, while at the same time offering great flexibility in solving some issues.

One of the most pertinent issues that face Beheira, as is common in the rural-majority regions of Egypt, is the provision of adequate sanitation and waste disposal services.

Another pertinent issue has been the illegal building of residential and commercial structures on agricultural land, which has seen a significant increase in the governorate over the past six years.

Abdo said that in 2010, hardly any villages in Egypt had a problem in accessing water channels. However, during the same period, water sanitation did not reach more than 15 percent of Egypt.

Abdo says that this large discrepancy between sanitation service provision and water provision is due to the fact that sanitation requires seven times more funds than water services.

“This discrepancy is not a result of the unequal division of resources across the different governorates, but it rather has to do with a centralised challenge regarding the allocation of public funds across all governorates nationwide.”

As Abdo concludes the first few official working hours since her appointment, she welcomes multiple guests into her office, including MPs from the varying regions in Beheira as well as syndicate heads.

Abdo clarifies that while much of her previous work as deputy governor has included setting up three garbage recycling projects in Beheira, as well as improvements in the provision of drinking water, health sector reform is what will require her direct attention in the coming period.

“This will include visiting multiple hospitals and health units, making sure there is no shortage of doctors and nurses, as well as improving the quality of healthcare,” Abdo concluded.