Egyptian, Russian foreign and defence ministers to meet in Cairo in May 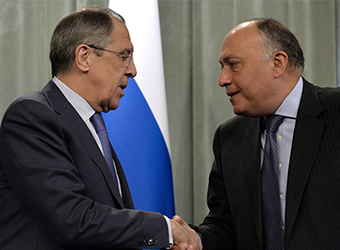 The Egyptian and Russian foreign ministers agreed in a phone call on Friday to meet in Cairo at the end of May, along with the two countries’ defence ministers, an Egyptian ministry spokesman announced in a statement.

Ahmed Abu Zeid, the official foreign affairs ministry spokesman, said in a statement that Foreign Minister Sameh Shoukry and his Russian counterpart Sergey Lavrov discussed several issues during the call, including enhancement of bilateral relations, the situation in Syria and Libya, and issues on the Security Council agenda which are of concern to both countries.

On Saturday, the secretary-general of the Egyptian parliament’s environment and energy committee said that Egypt and Russia are close to signing the final contract for construction of the Dabaa nuclear power plant northwest of Cairo.

In November 2015, the two countries signed an‎ agreement to build Egypt’s first nuclear power plant at the site on the Mediterranean cost. The construction will be financed by a $25 billion loan from Russia.

In February Russia announced the delivery of 50 MiG-29 fighter aircraft to Egypt by 2020. According to Russian state news agency Sputnik, the contract – reportedly initiated after Russian President Vladimir Putin’s meeting with Egyptian President Abdel Fattah al-Sisi in February 2014 – is the largest order for MiG-29 jets in the post-Soviet era.