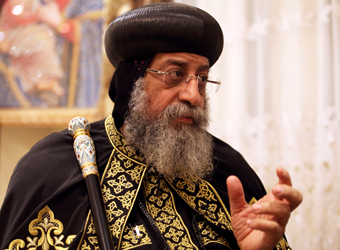 Share
The head of Egypt’s Coptic Orthodox Church, Pope Tawadros II, led the Palm Sunday mass at a church on Egypt’s north coast on Sunday, and in his remarks commemorated the 47 victims of two bomb attacks on Palm Sunday 2017.

Pope Tawadros led the service at the Virgin and Saint Marina Church near El-Alamein, in the north-coast governorate of Matrouh, one year after two terrorist bombs struck churches in Tanta and Alexandria.

According to Al-Ahram Arabic website, Tawadros said that the Coptic Church remembered the victims of the attacks, referring to them as “martyrs”.

The pope also called on people to maintain innocence in their hearts, like children “who are simple and innocent”. He slammed the world in general for losing its innocence.

“Make your heart as white as palm heart,” he told the assembled worshippers.

The Islamic State group claimed the attacks, which were timed to take place on Palm Sunday at the start of Holy Week.