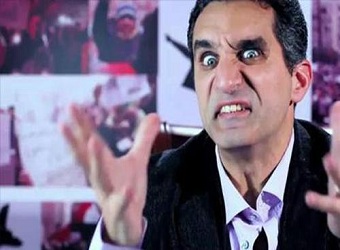 Egypt’s top satirist returned to television on Friday for the first airing of his show since it was pulled three months ago, and he skewered the public and media for lionizing the army chief widely expected to be the country’s next president.

In taking aim at the frenzy of support for Field Marshal Abdel Fattah al-Sisi, Bassem Youssef went further in his criticism of the army-backed political order than anyone else currently allowed on the airwaves.

Pledging not to discuss political issues that got his wildly popular show “The Program” yanked by private broadcaster CBC in November, Youssef showed that all topics in the country lead back to Sisi, who overthrew Islamist President Mohamed Morsi last year.

After attempting in a mock game show to explore subjects ranging from cooking to sports, Youssef asked with exasperation, “So what are we going to talk about?”

“There’s not another subject to talk about,” he concluded, adding that he would flip through Egyptian television to find another topic.

This led to a montage of Egyptians of all ages and various backgrounds, from talk show hosts to belly dancers, expressing their love for Sisi. When the clip ended, the heart surgeon-turned-comedian stuck a fake gun to his temple.

Youssef first poked fun at Egyptians for idolizing Sisi three months ago in the first episode of the show broadcast since Morsi’s ouster. The CBC channel then suspended his show, saying it had caused discontent and violated editorial policy.

Since then, a state crackdown on Morsi’s Muslim Brotherhood has escalated and expanded to include other critics of the army-backed interim government. The Brotherhood was declared a terrorist organization in December.

Several foreign journalists have been charged with aiding Egyptians belonging to a “terrorist organization,” demonstrating that simply interviewing or interacting with members of the Brotherhood could earn reporters jail time.

State and private media speak with reverence about Sisi and cast anyone who dares critique him, including Youssef, a traitor.

Sisi is expected to announce his candidacy for president any day and to win by a landslide in an election due within six months. Many compare him to Gamal Abdel Nasser, the charismatic colonel who led a coup against the monarchy in 1952.

In Friday’s program, broadcast by privately owned MBC Masr, Youssef promised to continue his show. “We won’t fear anyone,” he said as the unmistakable profile of Sisi appeared behind him.

“It’s better we don’t say anything about him,” he said quickly. “That’s not fear, that’s respect.”

There is no need for political satire, he then told the audience, because “the world is stable and everything is stable in the country.”

In the seven months since Morsi’s ouster, hundreds of his supporters have been killed by security forces and thousands have been jailed.

Bombings and assassinations of security officials have spread from the Sinai Peninsula to cities including Cairo as the state struggles to tame militant violence. At least 250 police have been killed in militant attacks since Morsi was overthrown.

As in the episode broadcast before his show was pulled, Youssef did not touch on the bloody events of recent months.

“He again focused on extreme forms of admiration and over-exultation … when it comes to Sisi, but there is also a subtle criticism of Sisi himself,” Egyptian political commentator Bassem Sabry said after the show.

Youssef, who has drawn inspiration from U.S. comedian Jon Stewart, rose to fame with a satirical online show after the 2011 uprising that toppled autocrat Hosni Mubarak.

His popularity skyrocketed when his TV program took aim at Morsi, drawing the ire of his government. Youssef was investigated on allegations of insulting Islam and the president. Critics of the Morsi government saw this as an attempt to stifle dissent. The charges were ultimately dropped.

Whether Youssef will be allowed to stay on air if he keeps up his sharp commentary was another topic of the broadcast.