Ethiopia to Accommodate Nations Concerned by Dam on Nile 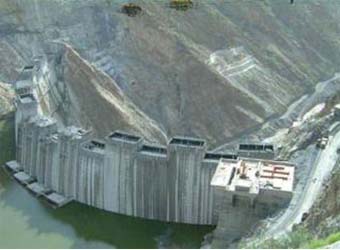 Ethiopia’s government said it will try to accommodate nations concerned that their water supplies may be affected by the damming of the Blue Nile River, as Sudanese and Egyptian officials met to discuss the issue.

Ethiopia, source of one of the two tributaries of the Nile River, will start filling the Grand Ethiopian Renaissance Dam on the Blue Nile at the “end of next year,” Deputy Prime Minister Debretsion Gebremichael said in an interview yesterday. The 80 billion-birr ($4.3 billion) hydropower project may begin generating 600 megawatts of electricity next year and is set for completion in 2017, he said.

The schedule for filling the 74 billion cubic meter reservoir is expected to be a “major concern” for the downstream nations of Egypt and Sudan, said Debretsion. Once completed, the power plant will be Africa’s largest with the capacity to generate 6,000 megawatts. Egypt, which relies on the Nile for almost all of its water, has historically opposed upstream projects on the world’s longest river.

“We are not selfish, we are not only looking at our national interest,” said Debretsion, who is also chairman of the state-owned Ethiopian Electric Power Corp. “This is an international river and we will try our best to accommodate their benefits and their interests.”

Egypt’s government and public are concerned that the dam may decrease the flow of the Nile, Mohamed Edrees, Egypt’s ambassador to Ethiopia, said in a phone interview today from Addis Ababa.

“Our concern is for it not to affect our water security, to harm the water coming to Egypt,” he said. “How to do it effectively on the ground and how to implement it, this is something to be left to the technicians to discuss and agree on.”

The dam, which will be twice the size of Singapore, will be full in “five to six years,” Ethiopian Water and Energy Minister Alemayehu Tegenu said at a ceremony to celebrate the diversion of the river yesterday in Guba, 454 kilometers (282 kilometers) northwest of Addis Ababa. “We won’t fill the reservoir at one go,” he said.

Sudan’s government has had consultations with Ethiopia and Egypt and there is a “broad understanding on the issue,” Foreign Ministry spokesman Abu-Bakr al-Siddiq said in a phone interview today from Khartoum, the capital.

“We don’t have any problem with what the Ethiopians have done,” he said. Edrees said the diversion has no “direct implication” as it doesn’t alter the flow of the river.

A technical committee made up of neutral experts and four representatives each from Ethiopia, Sudan and Egypt is expected to deliver a report on the project in a “few days,” Edrees said.

“Actual dam construction” can start after the diversion was carried out a “few days ago,” said Debretsion. The altering of the course was a milestone in the project as “we managed to direct Abay on our own side,” Alemayehu said, using the Amharic name for the Nile.

Members of the Ethiopian public have bought bonds worth more than 5 billion birr so far to pay for the dam, which will be financed from domestic sources only, Bereket Simon, who heads a fund-raising council for the project, said in an interview at the site yesterday.