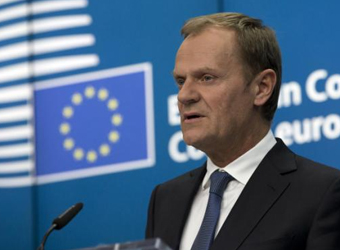 European Council head Donald Tusk told Turkey on Monday “to avoid threats or actions against any EU member and instead commit to good neighborly relations, peaceful dispute settlement and respect for territorial sovereignty”.

Tusk, who chairs EU leaders’ meeting, made the comments after speaking to the Cyprus President Nicos Anastasiades after Nicosia accused the Turkish military of obstructing a ship exploring for gas.

Cyprus on Sunday accused the Turkish military of obstructing a ship contracted by Italian oil company Eni from approaching an area to explore for natural gas, highlighting tensions over offshore resources in the east Mediterranean.

Syria suffering some of worst fighting of war, U.N. warns