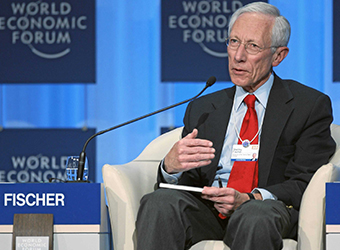 Speaking as Trump is directing officials to look at alterations to post-financial crisis reforms to the system, the central bank official expressed a high level of caution.

In directives to be issued Friday, Trump is looking at the “living wills” banks are mandated to have in case they need to be taken apart during a crisis, as well as what constitutes a “systemically important financial institution” subject to a higher level of regulation.

Both provisions are part of the Dodd-Frank reforms instituted after the financial crisis of 2008-09. Big wall street banks as well as some large nonbank lenders required billions of taxpayer bailout funds after the housing bubble collapsed. The reforms mandated higher capital levels and lower risk-taking for financial institutions.

However, Trump and others have criticized the law for inhibiting the financial activities needed to spark economic growth.

On another issue, Fischer said he believes the Fed still will hike rates three times in 2017, despite recent signs of a slowing economy.

Fischer attributed much of the slowness both in the economy and the inflation rate to seasonal factors that will go away as the year progresses.

“We’re feeling that way and so far haven’t seen anything to change that,” he said during an interview from the sidelines of the joint meeting of the International Monetary Fund and World Bank. “But we are dependent on what happens in the economy, and we’re not tied to three.”