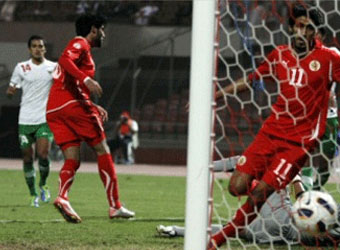 In order to advance to the next stage of the Asian qualifying section for the 2014 tournament, Bahrain needed to win handsomely and have Qatar lose to Iran.

Bahrain, coached by former England caretaker manager Peter Taylor, looked well on the way to overcoming a nine-goal differential deficit on Qatar, as Indonesia’s goalkeeper was sent off early in the match.

But 2022 World Cup hosts Qatar scored an 86th-minute equalizer to secure a place in the fourth phase along with Group E winners Iran.

“Given the unusual outcome in relation to the results-expectation and head-to-head history, in the interests of maintaining unequivocal confidence in our game, FIFA security will conduct a routine examination of this game and its result,” the ruling body said in a statement

Bahrain had scored just three goals in five previous Group E matches, while Indonesia had lost every game — conceding 16 goals in the process.

In September’s match between the two teams, Bahrain registered a 2-0 win in the Indonesian capital of Jakarta to bring head-to-head encounters level at two victories each and two draws.

Brazil will host the tournament for the second time in 2014, having won it on a record five occasions, according to CNN.

The World Cup will then be held in Russia in 2018, before heading to Qatar in 10 years’ time.

Airline adds legroom for a price