Following NGO Rule, US Senator Says Not ‘A Penny’ For Egypt Aid 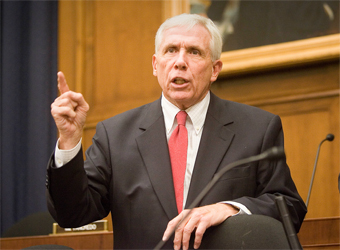 Virginia Rep. Frank Wolf (R-VA) spoke on Tuesday on the floor of the House of Representatives condemning an Egyptian court for sentencing 43 NGO workers, including Americans, to jail.  He also called for cutting off U.S. aid to the Muslim Brotherhood-led government in Cairo should the court decision stand.

Wolf cited news reporters saying that the NGOs were accused of having illegal foreign funding and, in addition to jail time, were ordered to permanently close.  Therefore, the senator has urged U.S. President Barack Obama and Secretary of State John Kerry to personally raise this “travesty of justice” with Egyptian President Mohamed Morsi.

Wolf has long supported efforts to help Egypt’s smooth transition to democracy.  He travelled to Egypt most recently in February.

The full text of Wolf’s statement is below.

“News broke today that an Egyptian court sentenced dozens of NGO workers, including the son of Transportation Secretary Ray LaHood, to jail, for their involvement with prominent pro-democracy organizations.

“The Egyptian government for years, beginning with the December 2011 raids, and throughout the course of the so-called investigation involving Freedom House, the National Democratic Institute, and the International Republican Institute has been engaging in a highly politicized charade.

“Prior to their closure, these organizations carried out important and legitimate programs to help support citizen participation in the Egyptian transition process—the very essence of democracy and America’s greatest export.

“I was in Egypt in February and heard first-hand that the Egyptian government’s handling of this case is symptomatic of a broader crack-down on civil society.

“This was a sham trial from the start.  If this decision stands, not a penny more of U.S. taxpayer money should go to the Muslim-Brotherhood led government in Cairo.

“I call on President Obama and Secretary Kerry to personally raise this travesty of justice with Egyptian President Morsi.”