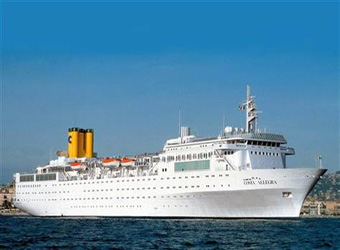 A French fishing vessel reached an Italian cruise ship drifting powerless in the Indian Ocean overnight and was towing it to a nearby Seychelles island, the Seychelles Coast Guard said Tuesday.

Seychelles authorities said they are making arrangements to evacuate people to the island of Descroches and then transfer the more than 1,000 passengers and crew members to the main Seychelles island of Mahe.

The Costa Allegra lost power on Monday after a fire in its generator room only six weeks after one of its sister ships, the Costa Concordia, hit a reef and capsized off Italy. No one was injured in the fire Monday, but the blaze set the cruiseliner adrift at sea in a region where Somali pirates prey on ships.

Two tug boats continued to steam toward the stranded cruise ship on Tuesday but were not expected to reach it until the afternoon. The tugs will tow the Costa Allegra back to the Seychelles’ main port — Port Victoria — under escort by the coast guard and military.