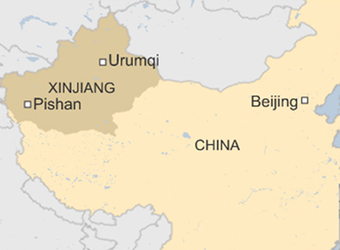 Five people have been killed and five others injured in a knife attack in China’s restive Xinjiang region.

The three knife-wielding assailants were shot dead by police on Tuesday in Pishan county, the local government said.

No motive was given, but the government often blames Muslim separatists for such attacks.

Xinjiang, an autonomous region, is home to China’s Uighur ethnic minority, which is predominantly Muslim.

The region has suffered years of unrest.

Rights groups say the violence is because of the tight controls by the government on the religion and culture of Uighurs. The government denies any repression.

A statement posted on the local government website called the attackers thugs. It said police were on the scene within minutes.

“At present, social order is normal at the site, society is stable, and investigation work is under way,” it concluded.