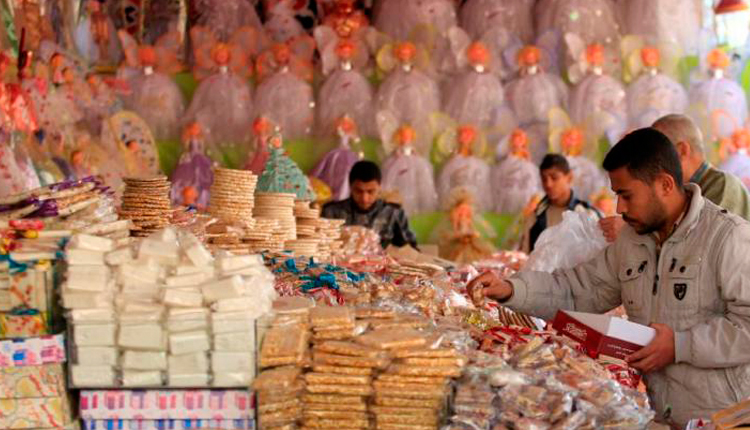 A rise in the sales of Halawet el-Moulid has been witnessed in Egypt’s Alexandria owing to Syrians’ delicious and colorful sweets, said Ahmed Mohsen, a member of Sweets Division at the Chamber of Commerce.

Halawet el-Moulid is different types of traditional pastries commemorating the birth of Prophet Mohammed. The famous sweets are made of sugar coated sesame, pistachio, and almond nuts. The Moulid doll and the sultan on a horse are made of sugar and nuts decorated with colored paper.

Pastries shops usually display different kinds of Halawet el-Moulid ahead of the occasion which occurred on Tuesday, Nov.20. Syrians living in Egypt have a special way in shaping and wrapping Halawet el-Moulid sweets, which has arguably affected the consumers’ behavior toward buying them, according to Mohsen.

Mohsen also attributed the rise in the sales rate to the winter season, during which Alexandrians tend to eat sweets to warm up. He further noted that the excessive sharing of Halawet el-Moulid pictures on social media, especially Facebook, has contributed to the increase in the turnout.

The prices of the sweets differ according to the quality and type of nuts used; they are estimated to start from 25 pounds to 1,800 pounds, which enabled different sectors of the society to enjoy the sweets.

Citing a decrease in the prices of the sweets, Mohsen referred to a number of political parties buying pastries boxes and selling them to citizens at reduced prices, which led to a significant increase in sales compared to previous years.

In Egypt and most of the world, people celebrate el-Moulid on the 12th day of the third month of the Islamic calendar, Rabi’ al-Awwal, because the lunar calendar advances 11 days each year, meaning that the exact date changes from year to year.

In Egypt, the celebrations are rooted deep in the country’s history; the traditions which we know today were first introduced during the Fatimid era. Before then, celebrations involved reading Quran only. Since the Fatimid rule, public squares have been decorated, tents have been set up for Sufi singing and special Moulid sweets have been made.

Egypt on track to achieve its financial targets: FinMin