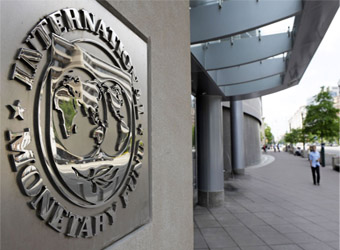 The ECB is due to hold a meeting on monetary policy on Thursday. Consumer inflation, which the bank wants to keep below, but close to 2 percent over the medium term, has been stuck in what the ECB called the danger zone of below 1 percent for five months.

“You can have too much of a good thing, including low inflation,” Reza Moghadam, the head of the IMF’s European Department said in a blog.

The blog was co-authored by his deputy Ranjit Teja and senior economist Pelin Berkmen.

“Very low inflation may benefit important segments of the population, notably net savers. But in the current context of widespread indebtedness problems, it is working to the detriment of recovery in the euro area, especially in the more fragile countries, where it is thwarting efforts to reduce debt, regain competitiveness and tackle unemployment,” they said in the blog.

“The ECB must be sure that policies are equal to the tasks of reversing the downward drift in inflation and forestalling the risk of a slide into deflation,” they said.

“It should thus consider further cuts in the policy rate and, more importantly, look for ways to substantially increase its balance sheet, be it through targeted LTROs or quantitative easing (public and private asset purchases),” the blog said.

On Monday, IMF chief Christine Lagarde said the fund saw a risk of an extended period of low inflation in the euro zone and that central bankers must be ready to act so that it does not derail an incipient recovery.

US Stocks Little Changed After Reports on Jobs, Service Sector

KSE Indexes in Red Zone upon Closing on Wednesday