In meeting with PM Abe: Trump says US committed to Japan security 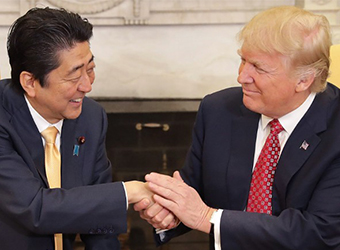 With a hug and a handshake, President Donald Trump and Japanese Prime Minister Shinzo Abe opened a new chapter in U.S.-Japan relations on Friday with Trump abruptly setting aside campaign pledges to force Tokyo to pay more for U.S. defence aid.

The two leaders appeared to have established a quick friendship during a day of talks at the White House and a flight together aboard Air Force One to Florida for a weekend of golf.

It was a welcome affirmation for Japan in the face of challenges such as China’s maritime expansion and North Korea’s nuclear and missile development.

“We are committed to the security of Japan and all areas under its administrative control and to further strengthening our very crucial alliance,” Trump said.

“The bond between our two nations and the friendship between our two peoples runs very, very deep. This administration is committed to bringing those ties even closer,” he added.

A joint U.S.-Japanese statement said the U.S. commitment to defend Japan through nuclear and conventional military capabilities is unwavering.

The statement amounted to a victory for Abe, who came to Washington wanting to develop a sense of trust and friendship with the new U.S. president and send a message that the decades-old alliance is unshakable.

Japan got continued U.S. backing for its dispute with Beijing over islands in the East China Sea that China also claims.

The clarified said the that two leaders affirmed that Article 5 of the U.S.-Japan security treaty covered the islands, known as the Senkaku in Japan and the Diaoyu in China.

Abe invited Trump for a visit to Japan this year and Trump accepted. U.S. Vice President Mike Pence will make an early stop in Tokyo.

But uncertainty remained in another area, that of trade, after Trump abruptly pulled the United States out of the planned Trans-Pacific Partnership trade deal.

Abe said he was fully aware of Trump’s decision to withdraw from the multilateral trade accord. But he said Japan and the United States had agreed on a new framework for economic dialogue.

“I am quite optimistic that good results will be seen from the dialogue,” he said, adding that Japan was looking for a fair, common set of rules for trade in the region.

A senior Japanese government spokesman said Abe and Trump did not discuss currency issues and that Trump did not request a bilateral trade deal.

The official told reporters that a U.S.-Japan economic dialogue will be led by Japanese Deputy Prime Minister Taro Aso and Vice President Mike Pence to address fiscal and monetary policies as well as infrastructure projects and trade.

Trump, who spoke by phone on Thursday night with Chinese President Xi Jinping, also said he considered dealing with North Korea’s nuclear program a very high priority, but gave no hint as to how his approach would differ from that of his predecessor, Barack Obama.

He predicted a level playing field on trade with China soon.

The Mar-a-Lago visit will be Trump’s first use of his Florida getaway for diplomatic purposes.

It will also be the most time Trump will have spent with a foreign leader since taking power last month and his second face-to-face meeting with a key ally after talks with British Prime Minister Theresa May two weeks ago.

Trump hosted Abe at Trump Tower last year in his first talks with a foreign leader after his surprise win in the November presidential election.

Abe played down his chances in scoring better than Trump in golf.

“My scores in golf are not up to the level of Trump at all, but my policy is never up, never in, always aiming for the cup,” he said.

Japan has had lingering concerns about what Trump’s self-styled “America First” strategy means for U.S. foreign policy in Asia as well as what his decision to withdraw from the Trans-Pacific Partnership trade pact means for bilateral economic ties.

Abe pledged Japan would help create U.S. jobs, hoping to persuade Trump to turn down the heat on economic matters and stand by the alliance.

To avoid questions about whether Japan is paying Trump for Abe to stay at the beachfront Mar-a-Lago retreat, the White House declared that the entire visit there- including golf- is the official gift for Abe from Trump.