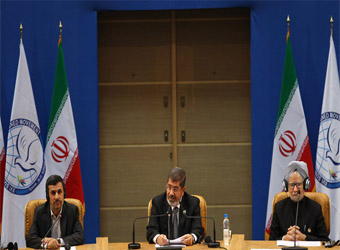 “The Islamic Republic of Iran denounces any act of extremism and violence which contradicts Islam and the tenets of Islam,” read a foreign ministry statement published by the website of English-language news channel, Press TV.

“Iran is certain that the sensible and revolutionary Egyptian nation, through its prudent leaders … will also exercise vigilance vis-à-vis plots to foment discord among various schools of Islam,” it added.

The four worshippers had gathered on Sunday at the home of a prominent Shi’ite on the outskirts of Cairo to mark a religious festival when the house was attacked by a hostile crowd, which accused them of heresy and beat them to death.

Egypt’s Islamist president, Mohamed Morsi, condemned the “heinous crime” but stands accused by Egyptian Shi’ite leaders and liberal opposition of promoting sectarian anger over the war in Syria as a means of appeasing its own hardline Sunni allies.

Around 90 percent of Iranians belong to the Shi’ite denomination, whereas in Egypt the figure is estimated at no more than 2 percent.