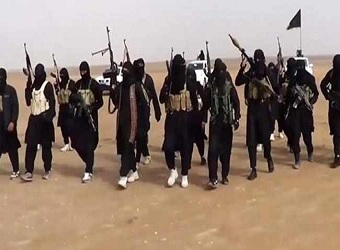 ISIS has launched its fiercest assault in a year against a besieged Syrian government enclave in the city of Deir al-Zor.

There tried to cut it off from a nearby military air base in a battle that has killed dozens.

A Syrian military source said the fighting was intense. “This attack is one of the most fierce attempts by Daesh on the airport and the area,” the source told Reuters, using an Arabic term for the group. “It seems Daesh has mobilized a big force.”

Describing the fighting as the fiercest in the eastern city for a year, the Syrian Observatory for Human Rights said on Monday that at least 82 people had been killed.

It also reported that Islamic State had cut the road linking the air base to the rest of the government enclave, meaning the army would be able to supply the city only by air drops, but this was denied by the military source.

The governor of Deir al-Zor, Mohammad Ibrahim Samra, said in a telephone interview on state television that clashes were taking place on the air base road.

The fiercest fighting was around the Deir al-Zor cemetery and a road junction known locally as the Panorama Roundabout, the Observatory said.

The dead comprised 28 from the army and allied militia, at least 40 Islamic State fighters, and 14 civilians, the British-based monitoring group said.

Islamic State advanced into Deir al-Zor and the surrounding area in 2015 and managed to besiege it last year, but the army retained control of the airport and neighboring districts in the city, which lies on the Euphrates river.

A U.S.-backed coalition of Kurdish and Arab militias and rival Turkish-backed Syrian rebel groups have pushed Islamic State from much of its territory in northern Syria, but it remains embedded in the eastern desert and Euphrates basin.

Last month it recaptured the city of Palmyra, 185 km (115 miles) southwest of Deir al-Zor, from the government in an unexpected advance that demonstrated its continuing military threat.