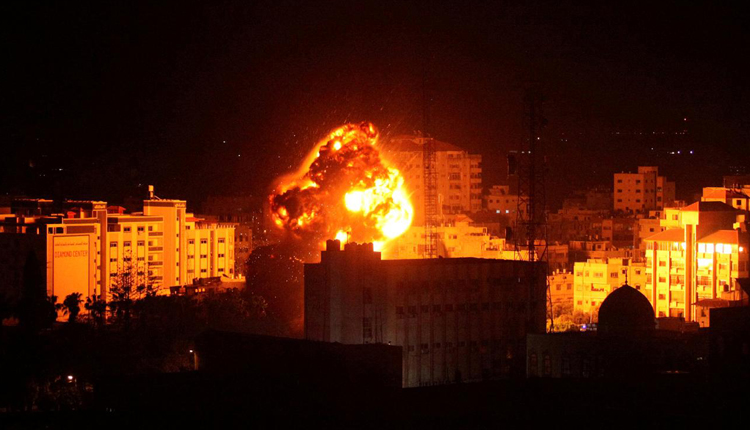 Militants from Gaza fired rockets into southern Israel and Israeli aircraft carried out strikes in Hamas-ruled territory overnight Tuesday, though the level of violence appeared to abate after Palestinians said a ceasefire had been reached.

After a day of intense cross-border fighting, Palestinian officials said Egypt had mediated a truce late on Monday. The respite didn’t last long, however.

Rocket sirens continued sounding in Israeli towns near the border, sending residents running for shelter. The military, which amassed extra troops and tanks along the border, said it struck a Hamas compound and outposts in response.

There were no immediate reports of casualties.

The latest round of violence began early Monday when seven Israelis were wounded near Tel Aviv when a house was destroyed by a rocket attack. Hours later Israel carried out a wave of retaliatory strikes, wounding five Palestinians.

Hamas, the Islamist militant group that rules Gaza, and smaller Palestinian factions put out a late-night statement that Egypt had mediated a ceasefire. Israeli officials did not comment on whether a truce had been reached.

Israel remained on high alert, with schools near the border kept closed and residents instructed to stay near bomb shelters.

The military said in a statement it remained “prepared for various scenarios.”

The escalation came just two weeks before an election in which Prime Minister Benjamin Netanyahu is fighting for his political life after a decade in power, campaigning on a tough line against Palestinian militants.

Beset by corruption scandals, he faces a strong challenge from a centrist coalition led by a top general.

Netanyahu cut short a visit to the United States, saying he would fly home right after meeting President Donald Trump.

Trump told reporters with Netanyahu at his side that Israel has the “absolute right” to defend itself.

Dozens of explosions had rocked the Palestinian coastal enclave of Gaza on Monday and ambulance sirens echoed in the mostly empty streets. In one neighborhood, people rushed to buy bread in anticipation of a long escalation. The office of Hamas chief Ismail Haniyeh was one of the initial targets hit, although he was likely to have been evacuated in advance.

Gaza militants fired barrages of rockets into Israel late into the night. Some were shot down by Israeli defenses and others landed in empty areas.

Israel has waged three wars on Gaza since Hamas took control of the territory in 2007. Israeli air strikes in retaliation for rockets from Gaza are a frequent occurrence, but Israel’s swift mobilization of extra troops to the border area was unusual.

The two sides have managed to avert all-out war for five years, most recently with the help of Egyptian mediation after a major escalation in November last year.