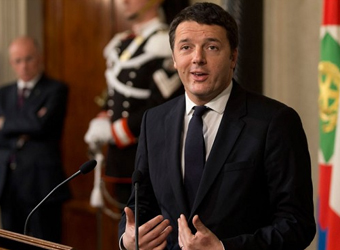 Former Prime Minister Matteo Renzi, the head of the ruling Democratic Party (PD), said on Friday Italy did not have any moral duty to take in migrants, sharply toughening his stance over surging numbers of asylum seekers.

Critics accused Renzi of adopting the language of rightist opponents less than a year before national elections, where the growing migration crisis is likely to dominate campaigning.

“We need to free ourselves from a sense of guilt. We do not have the moral duty to welcome into Italy people who are worse off than ourselves,” Renzi wrote in new book, excerpts of which were released ahead of publication on the PD website.

“There has to be a fixed number of arrivals,” he said, adding that Italy should help migrants in their home countries.

Underscoring the sensitivity of the issue, the comments were swiftly removed from the website, but not before they had generated a backlash among some PD supporters, and glee in the right-wing camp.

Matteo Salvini, the leader of the anti-immigrant Northern League party, posted the deleted text on his own Twitter account.

“Thanks for all the work. We will take it,” Salvini wrote. “They (the PD) chatter and get embarrassed about it, while we can’t wait to actually do it.”

More than 600,000 migrants have reached Italy over the past four years, the vast majority arriving by boat from Libya. About 85,000 have come ashore this year alone, roughly 20 percent up on the same period in 2016.

The upsurge in new arrivals, most of them from sub-Saharan Africa, has unsettled the Italian government, which has urged greater help from European allies in resettling the refugees.

Its requests have fallen largely on deaf ears and Renzi warned on Friday that Rome would look to curb funding to EU nations that had refused to offer help. “They are shutting their doors. We will block their funds,” he said.

Renzi’s PD party fared badly in local elections last month, losing control of 30 municipalities, including the traditional leftist stronghold of Genoa in northern Italy, with the migrant crisis increasingly weighing on the government.

Former European Commissioner for humanitarian affairs, Emma Bonino, caused embarrassment in PD ranks this week when she said that Renzi’s government had requested in 2014 that all the migrants leaving Libya be brought to Italy.

“At the beginning, we didn’t realise that this was a structural problem and not a passing phase. We shot ourselves in the foot,” said Bonino, a former Italian foreign minister.

Renzi denied her assertion on Friday, but said that in future, Italy should do more to encourage migrants to stay at home and develop their own economies. “We need to escape from our ‘do gooder’ mentality,” he said.

Erdogan says Turkey to respond to any threats on its border