Kanye West reveals why he met with Trump, teases #2024 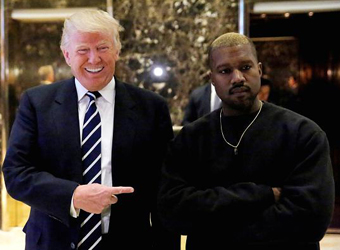 Kanye West explained the purpose of his visit to Trump Tower on Tuesday via a series of tweets hours after meeting with President-elect Donald Trump in Manhattan.

The celebrity — who has publicly said he did not vote in November’s presidential election, but would have voted for Trump — said he wanted to meet with the president-elect to discuss “multicultural issues,” including “bullying, supporting teachers, modernizing curriculums and violence in Chicago.” West’s visit with Trump was one of his first public appearances since his hospitalization, following strange onstage behavior and the abrupt cancellation of his tour.

After the meeting, Trump and West walked down together and posed for pictures. West did not answer any questions, simply saying, “I just want to take a picture right now.” Trump said the two were friends.

During his Nov. 17 concert in San Jose, California, West announced he would have voted for Trump if he had voted at all, drawing loud boos from the crowd and sparking mixed reactions from his fans on social media. He went on to bring up different social issues in the U.S., and at one point urged his audience to “stop focusing on racism.”

Before Trump clinched the presidency last month, West had previously said he would run for president in 2020. The day after the election, a parody Twitter account posted this depiction of the rapper sitting in the Oval Office.

He concluded his series of tweets on Tuesday with a lone hashtag, teasing what could be his plans to run for president in 2024. The post suggests he would not run against Trump if he decides to pursue re-election, instead, he may opt to run in eight years, perhaps as the country nears the conclusion of what could possibly be Trump’s second term as president.