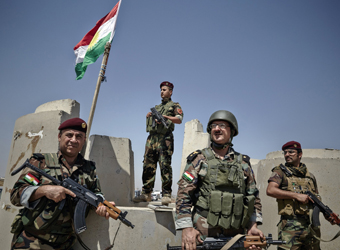 The Syrian Kurdish YPG militia aims to “liberate” the area between Azaz and Jarablus held by Turkey-backed Syrian rebels, a YPG commander said in a statement.

Commander Sipan Hemo did not give a timeline or details of plans to take the area, which was seized by the Turkey-backed rebels last autumn from Islamic State, but said he regarded Turkey as an occupying force there.

His comments, in a statement to a Kurdish newspaper, were distributed on a social networking feed by Naser Haj Mansour, a senior official in the U.S.-backed Syrian Democratic Forces (SDF), of which the YPG is a leading component.

Increasing tensions between Turkey and Syrian Kurdish groups led to an exchange of fire between Turkish artillery and YPG targets near Azaz on Tuesday.

Ankara had sent new military reinforcements, including troops, vehicles and equipment into the zone between Azaz and Jarablus held by rebels it supports, the Syrian Observatory for Human Rights, and rebel and Kurdish sources said on Wednesday.

The Observatory said the reinforcements were part of preparations by Turkey to attack the YPG-held areas near Azaz.

Turkey regards the YPG as an extension of the Kurdistan Workers Party (PKK), which has fought an insurgency inside Turkey for three decades.

It has strongly criticized the United States for arming the YPG as part of efforts to support the SDF in its battle to recapture Raqqa from Islamic State.

Kurdish officials have warned that any Turkish attack on areas held by the SDF or YPG in northern Syria would distract from their offensive to defeat Islamic State in Raqqa.