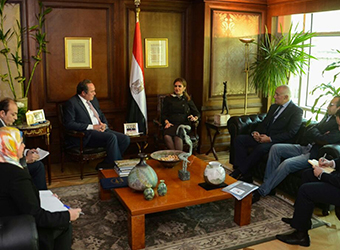 Egypt and Lebanon are set to sign soon around 15 official documents, including agreements and memoranda of understanding, aimed to enhance means of bilateral cooperation in all economic fields.

Nasr, who chairs the ministerial preparatory committee, indicated that both countries gave due regard to the convention of the ELJHC, given that it has been 7 years since the committee was last held in 2010.

The role of ELJHC is to eliminate obstacles hindering the increase of bilateral trade and to identify causes which stand as obstacles to the flow of trade, the Egyptian minister said, stressing the necessity of the activation of the joint business council.

Nasr also highlighted the vital role of businessmen in both countries and ELBA’s effective role, while reiterating the importance that the upcoming period would witness further activities so as to provide access to Egyptian exports to Africa.

For his part, Fawzi invited Nasr to participate and deliver a speech in the third Egyptian-Lebanese Business Forum scheduled to take place in Beirut under the theme “Egyptian-Lebanese Integration”.