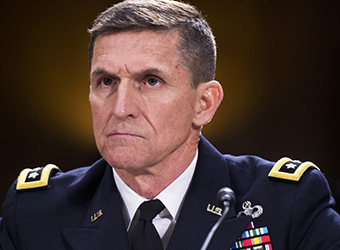 Former National Security Adviser Michael Flynn will provide documents to the Senate intelligence committee as part of its probe into Russia’s meddling in the 2016 election, The Associated Press has learned.

Flynn will turn over documents related to two of his businesses as well as some personal documents the committee requested earlier this month, a person close to Flynn said. Flynn plans to produce documents by next week. The person spoke on condition of anonymity to discuss Flynn’s private interactions with the committee.

The decision Tuesday was the first signal that Flynn and the Senate panel have found common ground. Congressional investigators continue to press for key documents in the ongoing investigation, and the retired lieutenant general is trying to limit damaging disclosures that hostile Democratic lawmakers could use against him.

Flynn had previously invoked his Fifth Amendment protection against self-incrimination in declining an earlier request from the committee.

Flynn’s attorneys had argued the initial request was too broad and would have required Flynn to turn over information that could have been used against him.

Cohen, a longtime attorney for the Trump Organisation, remains a personal lawyer for Trump. He served as a cable television surrogate for the Republican during the presidential campaign.

The House intelligence committee’s request for information from Cohen came as the investigators continued to scrutinize members of Trump’s inner circle, including Flynn. Rep. Adam Schiff, D-Calif., said last week that a subpoena for Flynn from the House panel was likely.

“I declined the invitation to participate as the request was poorly phrased, overly broad and not capable of being answered,” Cohen told The Associated Press. “I find it irresponsible and improper that the request sent to me was leaked by those working on the committee.”

Cohen told ABC News Tuesday that he had been asked by both the House and Senate intelligence committees to provide information and testimony about contacts he had with Russian officials.

Russian President Vladimir Putin said the allegations of Moscow meddling in the U.S. presidential election are “fiction” invented by the Democrats in order to explain their loss.

In an interview with French newspaper Le Figaro, Putin reaffirmed his strong denial of Russian involvement in the hacking of Democratic emails. The interview was recorded during Putin’s Monday trip to Paris and released Tuesday.

Trump made a similar claim in a tweet early Tuesday: “Russian officials must be laughing at the U.S. & how a lame excuse for why the Dems lost the election has taken over the Fake News.”

Cohen’s ties with Russian interests came up in February when The New York Times reported that Cohen helped to broker a Ukraine peace plan that would call for the withdrawal of Russian troops from Ukraine and a referendum to let Ukrainians decide whether the part of the country seized by Russia in 2014 should be leased to Moscow. The Russian government denied knowing anything about such a plan.

The Times reported that the peace plan was the work of Felix Sater, a business associate who has helped Trump try to find business in Russia, and Cohen.

Cohen was a fierce defender of Trump during the campaign, often haranguing probing reporters and famously challenging a CNN reporter live on-air to name the specific polls that showed then-candidate Trump behind his rival, Hillary Clinton.

In the early 2000s, he formed his own firm working on a range of legal matters, including malpractice cases, business law and work on an ethanol business in Ukraine. Cohen also owned and operated a handful of taxi medallions, managing a fleet of cabs in New York.

Cohen’s business associates in the taxi enterprise included a number of men from the former Soviet Union, including his Ukrainian-born father-in-law.

Cohen has made his own unsuccessful attempts at public office, losing a city council race and briefly running for state assembly in New York.

Trump’s tweet tirade against Germany could backfire on US

Suppliers fall if Apple has bad news, it could overcome a drastic iPhone slowdown