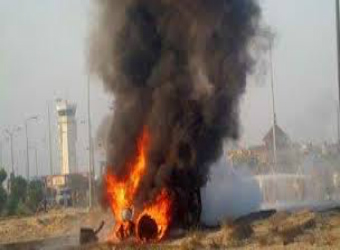 Suspected militants have blown up a gas pipeline carrying gas to Jordan and an industrial area in Egypt’s Sinai Peninsula, security officials said.

The blast late on Tuesday, the fifth this year, occurred in Lahfen, south of the coastal town of Al-Arish, Al-Ahram Arabic news website reported.

The assailants reportedly planted a bomb near the pipeline and detonated it remotely.

There were no immediate reports of casualties and security forces are scanning the area for suspects, security sources said.

The flow of gas along the pipeline was halted to control a fire that sent sheets of flames rising into the sky, said an Al-Ahram reporter, adding that ambulances had rushed to the scene.

The blast carries the hallmarks of Al-Qaeda-inspired militant group Ansar Beit Al-Maqdis, which has claimed well over a dozen attacks on Sinai pipelines since the 2011 uprising that toppled autocrat Hosni Mubarak. The group has also claimed most of the deadly terror attacks targeting police in Cairo and Nile Delta in recent months.

Two weeks ago, militants blew up a pipeline feeding an industrial zone in central Sinai.

Attacks on pipelines over the past three years have repeatedly forced a halt to Egypt’s gas exports to Israel and Jordan.

Egypt’s army is waging a broad campaign to crush an Islamist insurgency in the volatile peninsula that has spiked since the army, prompted by mass protests, deposed Islamist president Mohamed Morsi in July 2013.

Dozens of police and soldiers have been killed in bombings and shootings, and the army has killed dozens of militant suspects in air and ground offensives this year.