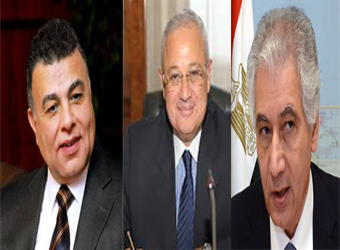 The Egyptian Minister of Finance H.E. Dr. Ahmed Galal, Minister of Investment H.E. Dr. Osama Saleh and Minister of Tourism H.E. Hisham Zazou have officially opened the world’s leading organizer of conferences for capital markets and cross border investments,  Euromoney Conference 2013 on Monday in Cairo under the title of “Economic Priorities and the Role of Financial Markets.”

Amwal Al Ghad is providing its media sponsorship for Euromoney Egypt Conference, the biggest and most important financial event in Egypt.

The conference is set to assess what actually has happened, the current trend path for the Egyptian economy and scenarios for what happens next. It will also once again provide a platform for urgent discussions about Egypt’s economic, financial and investment future and will advocate for a much higher priority for the economy than has been the case so far.

The three Egyptian ministers will provide insight into their plans to kick start Egypt’s financial and tourism sectors at the 2013 Euromoney Conference.

Adviser to the Egyptian Presidency Dr. Mostafa Hegazy will give the lunch keynote interview at Euromoney’s 19th annual conference in Cairo on Monday 11 November.

The regional general manager of the Euromoney conferences, Richard Banks, believes that hosting the conference in this critical period is very important for the Egyptian economy. In this period of turbulence, the Euromoney provides a platform to enable discussions about the future of the Egyptian economy and financial sectors. It also aims to provide Egypt with the financial support for development.

Although Egypt still has a long way to go, it is clear that the Egyptian government and foreign investors have a shared vision of the economy in the near future. He adds all parties are ready to move forward towards a better Egypt.

Banks states that Egyptian decision-makers, along with businessmen and investors, are taking positive steps towards financing the budget deficit and major developmental projects. They also aim to revive production and industries. These significant changes would completely change the current economic situation to the better.

The Egyptian economy needs $40bln in investments to regain trust