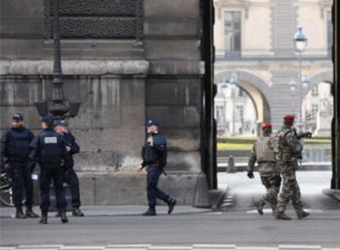 Egypt’s foreign ministry said that no tensions have arisen between Egypt and France, and the relationship will not be affected after the nationality of the man behind an attack near Paris’ Louvre Museum was revealed to be Egyptian.

On Friday, A French soldier shot and seriously wounded the reported attacker after he rushed towards a group of soldiers and guards shouting Allahu akbar, in a shopping mall beneath the Louvre Museum, AP reported a French official as saying.

The man was carrying two backpacks and had two machetes, the French official said.

He is currently in a French hospital and his condition is no longer critical.

He said that Egypt is one of the first victims of terrorism and that everyone is targeted by terrorist attacks, whether they are Egyptian, French or citizens of all other countries.”

Abu Zeid said that French investigations so far indicate the perpetrator is an Egyptian national, but that the foreign ministry is awaiting the conclusion of the French police investigation.

Following the attack, Egypt’s foreign ministry released a statement denouncing the incident and called on the international community to intensify its efforts to combat terrorism.

Egypt’s army and police forces have been waging a war over the past three years against an Islamist militant insurgency in North Sinai.

Hundreds of security personnel and militants have been killed in the violence.

Bank ABC will complete due diligence on Blom Bank…

Egypt’s economy will grow at a 3.3% clip during FY…