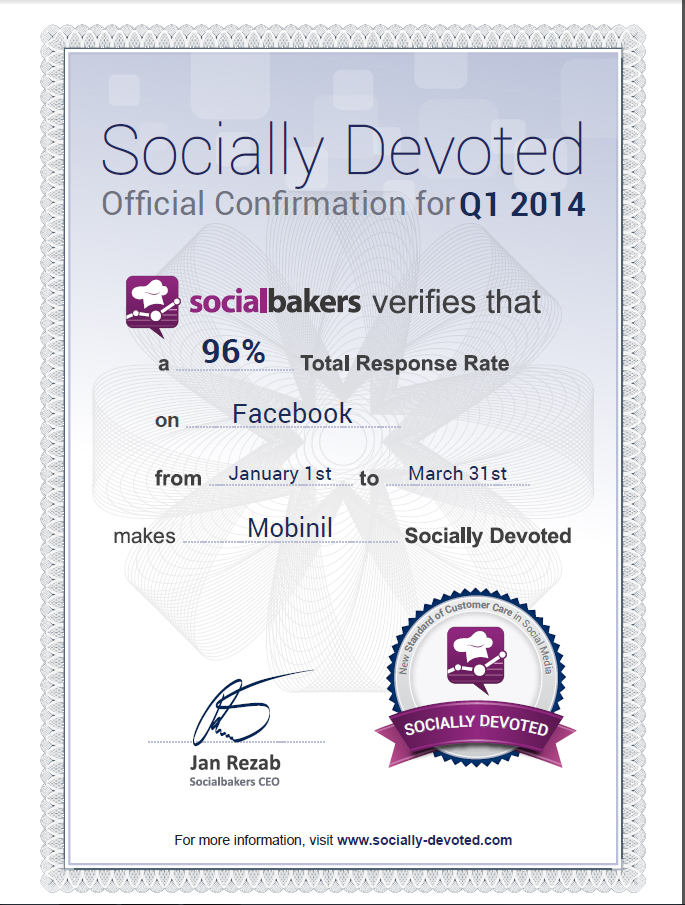 Mobinil’s page on Facebook continued to reap advanced position from international organizations operating in the field of social media by receiving a certificate of appreciation from Socialbakers company as one of the top 5 most socially devoted brands in the first quarter of 2014 in Egypt after succeeding to attract 4 million fans & responding to 96% of customers queries in the least possible time.

Mobinil acquired this certificate after millions of  fans relied on Mobinil’s Facebook page as the fastest source for 24/7 online customer support, engaging them in entertaining activities and for continuously  updating them with the company’s latest promotions and offers.

According to Socialbakers statistics since May 2012,  Mobinil was amongst the most socially devoted brands in Egypt 22 times, 16 of which Mobinil recorded first position.

On this occasion Eng. Ashraf Halim, Mobinil’s VP Commercial stated, “We are proud to receive this award from the reputable Socialbakers organization as it indicates how Mobinil is keen on enhancing its customers‘ experience  wherever they are whether directly through our shops, our website or our social media platforms that attract youth a lot “.

Meanwhile, Mobinil has a long record of achievements in the field of social media as it was ranked in 2013 by afriqueitnews.com as one of the top 10 social brands in Africa. Furthermore, its viewership on YouTube also continued to be among Egypt’s top 3 brand channels consistently over the past two years, garnering more than 29Million video views and over 50K subscribers on its YouTube channel.