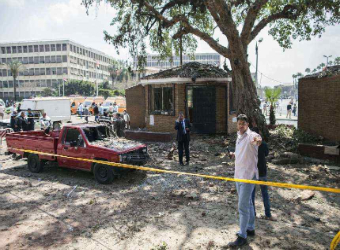 Forensic reports into the death of an Egyptian brigadier-general killed on Wednesday in an explosion at Cairo University show that the bomb had been packed with nails, according to Al-Ahram’s Arabic news website.

Tarek El-Mergawi, who died in the first of three bombings, was hit with three nails that pierced his heart and chest, resulting in the internal bleeding that led to his death, said Hisham Abdel-Hamid, head of doctors at the forensic authority.

The three explosions took place near a police post outside of the university’s gates, according to Hesham Youssef, the head of the explosives section at Giza security directorate.

At least five other police officers were injured in the first bombing.

A fourth bomb was later defused in the same area.