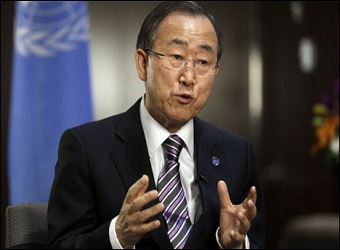 U.N. Secretary-General Ban Ki-moon expressed his strong concerns to Egypt on Wednesday over a court’s sentencing of more than 500 people and the detention of journalists.

Ban met with Egyptian Foreign Minister Nabil Fahmy in Brussels on the sidelines of a European Union-African summit.

“The Secretary-General conveyed to the Minister his strong concerns regarding the mass death penalty sentences announced recently, as well as the detention of journalists,” Ban’s press office said in a statement.

Egypt put three journalists of the Qatar-based television network Al Jazeera – an Australian, a Canadian-Egyptian and an Egyptian – on trial in February on charges of aiding members of the Muslim Brotherhood. Rights groups have criticized the case as a violation of freedom of expression.