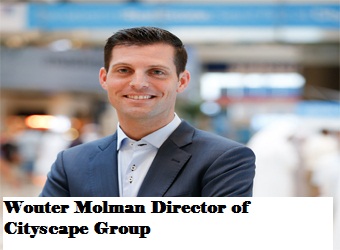 This April will witness one of the most important events on the industry calendar, Cityscape Egypt 2014 in association with Next Move.

Following 5.9% growth in the sector year on year and real estate’s contribution to overall GDP climbing 4.6% in the same period, Cityscape Egypt 2014 will be the largest in its history withmore than 100 exhibitors and over 100,000 showcased properties.

Director of Cityscape Group, Mr. Wouter Molman revealed that increased demand for exhibition space has resulted in a sell-out event, with halls booked out weeks ahead of its opening on 9-12 April at the Cairo International Convention & Exhibition Centre (CICC). Visitor numbers are expected to match the continued growth of the exhibition, totaling more than 12,000 in 2013.

Further improvements to the mortgage market include this week’s announcement by Central bank of Egypt to allocate EGP 10 billion funding to affordable housing units.  Over a 20-year period, banks will acquire money from the Central bank at below market interest rates and re-lend to low earners at a 7% decreasing rate of return. The announcement comes just days after the government inked a landmark deal to build 1 million affordable homes across Egypt with UAE construction company Arabtec Holding.

Financial flexibility is being reported alongside a number of other positive announcements including Al-Futtaim Group’s $2.2 billion worth of new developments, TalaatMoustafa’s 7.2 percent increase in net profit (in 2013) and significant levels of new supply entering the retail and residential markets.

Dr. Mohamed El Mikawi, Managing Director of Al Futtaim Group Real Estate explained “Cityscape provides unparalleled opportunities that can help revive the sector. Having such a wide-range of properties to suit all tastes under one roof enables developers to get more insight into customers’ preferences.” Mikawi added that his company is planning to exhibit the second phase of its “Cairo Festival City” (CFC) mixed used project.

“The event timing is commensurate with a potential sector rebound on the account of foreign Direct Investment inflows. Investors need events like Cityscape to form a clear vision of the current status of the market,” said Esam Hafez, Country Director at Retail Group Egypt.

Egypt’s real estate market has long been a key pillar of the economy and a lucrative market for investors seeking immediate income, medium to long term capital growth and a good resale potential. Recent announcements affirm that Egypt is on track to accelerate its economic growth, sustained by the government continuous efforts and the increasing property demand and supply.