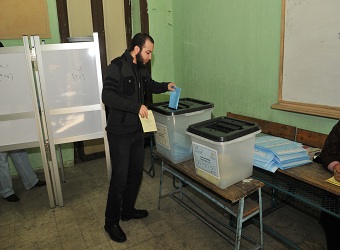 In a press conference held on Saturday, Mansour’s legal and constitutional affairs advisor Ali Awad announced that Mansour has issued a decree (no.22/2014) that has led to the promulgation of a new presidential elections law.

The law was first issued in 2005 when ousted president Hosni Mubarak changed the constitution to allow multi-candidate presidential elections for the first time.

Awad indicated that the next step will be a meeting of the Presidential Election Commission (PEC) – the five-member judicial body tasked with supervising presidential polls – to prepare for the process which will see Egypt elect its second president in three years.

PEC is expected to meet on Sunday or Monday to start preparations, first of which is announcing the date of registration.

In the words of Awad, “the new piece of legislation includes 60 articles that come under seven chapters.”

Awad announced that the final draft of the law came in favour of rejecting appeals in presidential elections. “In this way, PEC’s decisions will remain immune to any appeals,” said Mansour.

Awad explained that Mansour’s rejection of appeals in presidential elections came upon request of the General Assembly of the High Constitutional Court and the approval of the newly-formed cabinet of Ibrahim Mehleb on Thursday.

“The High Constitutional Court’s judges agreed in a letter to Mansour that rejecting appeals in presidential polls goes in line with the new constitution which left PEC’s make-up and prerogatives intact,” said Awad, also arguing that “the courts’ judges also agreed that making PEC’s decisions immune to appeals do not contravene Article 97 of the new constitution.”

Awad said Mansour was keen to put the new law to a national dialogue among political factions and also ask judicial authorities to revise it in legal and constitutional terms. “While some judicial authorities said PEC’s decisions must not be immune to appeals, the president came out in favour of the High Constitutional Court’s opinion which rejected appeals in presidential elections,” explained Awad.

Mansour was appointed chairman of the High Constitutional Court on 30 June 2013, but he became an interim president of Egypt after Islamist president Mohamed Morsi was removed from office on 3 July.

Awad argued that most political factions and the court’s judges agreed that appeals could delay the presidential election process, cast doubt on the legality of the next president, and thus impact national security.

Awad, however, indicated that Article 15 of the new law still gives hopeful candidates the right to file complaints with PEC should it reject their presidential bids.

According to Article 15, PEC must inform hopeful candidates whose bids were rejected of the reasons for its rejection within two days, and that disqualified candidates can file complaints against PEC’s rejection of their bids within the next two days. PEC will listen to their objections in a hearing session and then give a final decision about complaints within two days.

Awad also indicated that “candidates will be also allowed to file appeals against PEC’s decisions before the High Constitutional Court which is authorised by the new constitution to exercise a post-scrutiny of laws.”

Awad strongly rejected charges that the promulgation of the law was deliberately delayed to serve the agenda of army chief Abdel-Fattah El-Sisi, who is expected to stand in the upcoming presidential elections. “The law faced delays because President Mansour, who is also chairman of the High Constitutional Court, was keen to listen to all judicial authorities and political forces,” said Awad.

Amr El-Chobaki, a political analyst at the Ahram institution, told Ahram Online that “the rejection of appeals is a good step because it helps the position of the president of the republic remain secure, not to mention that candidates will still have the right to file complaints with PEC itself which is composed of senior judges affiliated with  Egypt’s highest judicial authorities.”

In general, Awad said in order for hopeful candidates to be eligible for running in the upcoming presidential elections, they must meet eight conditions.

According to Article 1 of the law, explained Awad, hopeful candidates must be born to Egyptians parents; neither the candidate’s parents nor his or her spouse can hold dual nationality; the candidate must be a university graduate; they must be in full exercise of their civil and political rights; they must not have been convicted of any criminal or ethical charges; they must have completed military service or been legally exempted from it; they must be at least 40 years old; and they must be free from any physical or mental illnesses that might impact the performance of  presidential duties.

The above text represented a slight change from the original draft which refrained from stipulating that a candidate must hold a university degree.

The new law does not stipulate that “hopeful candidates who currently face trial or are in custody pending trial” will be stripped of exercising their political rights.

The newly appointed government, however, decided on Thursday to amend the 1956 law on political rights to impose this stipulation. If implemented, it would prevent ousted presidents Mohamed Morsi and Hosni Mubarak, who are currently facing trials, from contesting elections.

Commenting on the above, El-Chobaki told Ahram Online that he is against compelling candidates to hold a university degree.

“This is a discriminatory article that was not instituted by the new constitution,” said El-Chobaki.

El-Chobaki also insisted that preventing “those who currently face trials” from contesting elections goes against the new constitution which states that a defendant is innocent until proven guilty by the court.

Article 2 stipulates that a hopeful candidate must gain the endorsement of at least 20 elected MPs or 25,000 citizens residing in at least 15 governorates – and with a minimum of 1,000 in each.

El-Chobaki said the rise in spending reflects reality on the ground. “In a country whose population soared to around 90 million, a ceiling of LE10 million can never be enough,” he said, adding that it is also a good step that the law entrusted the Central Auditing Agency with scrutinising spending on campaigns.

Donations, according to Article 23, will be deposited in a public sector bank account and candidates will have to submit a detailed statement of the money they have spent within 15 days of the date of the announcement of the final result of polls. The same article bans candidates from obtaining funding from any foreign institutions or individuals.