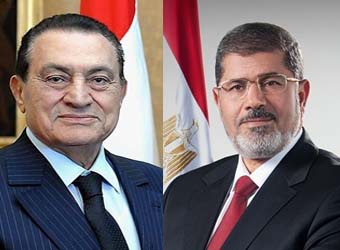 Egypt’s government plans to amend the law regarding the exercise of political rights with the aim of preventing both former presidents Mohamed Morsi and Hosni Mubarak from standing in upcoming elections. Previously the law only prevented Mubarak as a former member of the dissolved National Democratic Party (NDP).

The State Council, a judicial body entrusted with revising government-drafted laws and reviewing appeals filed against administrative orders, is expected to meet on Saturday to discuss an unexpected amendment of the 1956 law on the exercise of political rights.

The amendment was approved by the first meeting of a newly-appointed cabinet on Thursday.

According to a well-connected source who asked not to be named, the amendment aims to change Article 3 of the above-mentioned law to strip citizens who are currently facing trial or in custody pending trial on criminal charges of exercising their political rights, including the right to run in presidential elections.

The law was last amended by an elected parliament in 2012, a few months ahead of the country’s first free presidential elections, won by Morsi. The 2012 parliament, which was dominated by Muslim Brotherhood and Salafist representatives, amended Article 3 to state that “those who held the offices of the president of the republic, vice president, prime minister, and chairman of the (now defunct) ruling National Democratic Party (NDP) or its secretary-general or a member of its political politburo or secretariat-general during the period prior to  11 February 2011 (the day Mubarak resigned from office) shall be prevented  from exercising their political rights for ten consecutive  years” from the date the amendments were passed.

The new amendment, as approved by the cabinet on Thursday, revokes the above text in favour of stating that “those who were referred to trial before criminal courts or are in custody pending trial and could be finally convicted” will be stripped of exercising their political rights.

Magdi El-Agati, chairman of the State Council’s Department of Fatwas and Legislation, said the council will on Saturday begin discussing the government-drafted amendments to the law.

Informed sources said the new amendments were originally drafted by interim president Adly Mansour’s legal team. They said it came after rumours were rampant that ousted Islamist president Mohamed Morsi, who is currently facing trial on a number of charges is legally allowed to run in the upcoming presidential elections “as long as he has not been convicted by any court.”

Hosni Mubarak, who has been on trial since August 2011, was sentenced to 25 years in jail in 2012, but the verdict was overturned by the Court of Cassation and a re-trial was ordered. Mubarak’s stay in custody expired in 2013 and he is currently being held in military hospital in Maadi in Cairo.