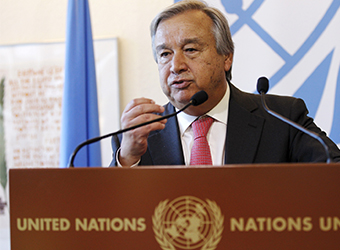 As part of his first official tour in the region, the UN’s secretary-general will accordingly visit Turkey, Saudi Arabia, the United Arab Emirates, Oman, Qatar and Egypt.

President Sisi congratulated the Portuguese people on the election of Guterres as the new secretary-general of the United Nations during an official visit to Lisbon in November 2016.

Last October, the General Assembly of the United Nations appointed by acclamation Antonio Guterres, who is the former Prime Minister of Portugal, as the United Nations Secretary-General to succeed Ban Ki-moon, who ended his term on 31 December.