No majority in British parliament for second Brexit referendum 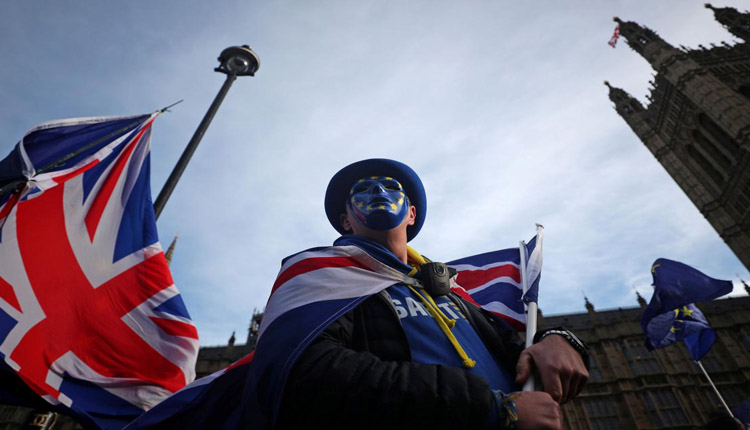 There is no majority in Britain’s parliament in favor of holding a second Brexit referendum, according to a Reuters analysis of public comments made by lawmakers.

Britain is due to leave the European Union at the end of this month, and with parliament yet to approve Prime Minister Theresa May’s exit deal, calls for a second referendum to break the deadlock, often dubbed a ‘people’s vote’, have intensified.

Last month, the opposition Labour Party broke new ground for one of the major parties by saying it would support a new referendum on May’s deal after parliament defeated its alternative Brexit plan.

Labour’s position could face its first test on Tuesday when May’s deal is brought back to parliament. Labour indicated on Sunday it would not put forward its own proposal for a second referendum at that time, but other lawmakers could force a vote on the issue.

While a majority of lawmakers voted to remain in the bloc in the 2016 referendum, a Reuters analysis of public comments found that only 219 have expressed a willingness to support another vote, and a further 65 have not made their views known.

This is well short of the 318 votes needed to guarantee approval of the amendment if there are no absences or abstentions.

A referendum would need to be approved by parliament and May has ruled out proposing one, saying it would deepen already ugly divisions over Britain’s biggest decision since World War Two and betray the 52 percent – 17.4 million people – who voted to leave the EU.

While Tuesday’s votes on amendments are not binding on the government, they would be politically hard to ignore.

Those in favor of a new referendum include many Labour lawmakers, seven of May’s Conservatives, the newly formed Independent Group and the pro-EU Liberal Democrats. The Westminster leader of the Scottish National Party has also backed the idea of another vote, although at least one of his lawmakers has voiced concern.

In contrast, 245 lawmakers openly oppose the idea, 15 are deeply skeptical and a further 94 government ministers and whips, or parliamentary enforcers, would be required to vote in line with the government’s position against another referendum.

So far, 24 of Labour’s 245 lawmakers have said publicly they do not support another referendum, while a further 13, many of whom represent areas that voted strongly in favor of leaving the EU, have expressed reservations.

“I will not, shall not and cannot vote for a second referendum, regardless of how much lipstick is put on it and what it is called,” Labour lawmaker Gareth Snell told parliament after his party announced its backing for another vote.

“That is a distraction from the main purpose of our job, which is to find a deal.”

Labour lawmaker Caroline Flint has said as many as 60 or 70 of her colleagues oppose a referendum.

It is unclear what conditions Labour might attach to supporting a second referendum, and there is disagreement within the party over whether any referendum should include an option to remain in the EU.

Labour leader Jeremy Corbyn, who voted against joining the EU in 1975, has said his party would support a referendum to “prevent a damaging Tory (Conservative) Brexit or disastrous ‘no deal’” – leaving open the possibility that it would back a different deal without a popular vote.

Some lawmakers may yet change their minds, particularly if any referendum was a confirmatory vote on whether to back May’s deal, much as Corbyn suggests, rather than a re-run of the 2016 vote. But the numbers suggest it is likely to have difficulty getting through parliament.

Opinion polls indicate Britons are still deeply divided over Brexit. While most voters would stick to their 2016 choice, some surveys have shown a swing towards remaining in the EU.

A YouGov poll last month found that, when asked to choose between accepting May’s deal and having another referendum, 51 percent favored a fresh vote and 49 percent – the deal.

Lawmakers across parties cite worries about prolonging uncertainty and increasing division as reasons for opposing a vote, while the most common argument is that it would be undemocratic to seek to overturn the result of a vote in which more than 30 million people took part.

But pro-referendum campaigners say voters did not know what kind of Brexit was available when they were offered a binary choice between “Remain” and “Leave” in the 2016 referendum.

“Now we know what Brexit looks like, now we know the cost, and now we know how badly Brexit compares to our current deal in the EU, the only way forward is to put it to the people,” said Labour lawmaker and People’s Vote campaigner David Lammy.