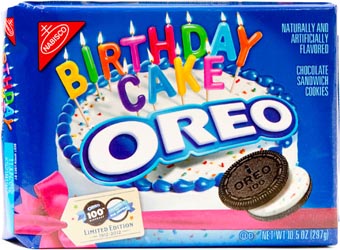 Tuesday, March 6, 2012, marks a momentous occasion in history — Oreo cookie’s birthday. And it’s not just any birthday; Oreo is turning the big 100.

According to The New York Times, it all started on March 6, 1912, when The National Biscuit Company sold its first Oreo sandwich cookies to S.C. Thuesen, a grocer in Hoboken, New Jersey.

The Oreo cookie was born at what is now a New York tourist hotspot and home to Food Network Studios, Chelsea Market. Chelsea Market was once the headquarters for the National Biscuit Company, which would later go by Nabisco. While the headquarters, the owning company, and the cookie itself have undergone many changes throughout the years, the world’s love for Oreos has continued to grow.

The design on the outside of the classic cookie alone has changed three times, from a simple wreath around the Oreo name to today’s complicated design complete with a serrated edge.

Since they were first baked in 1912, more than 362 billion Oreos have been consumed worldwide. Now, 100 years later, Kraft Foods is planning a centennial birthday bash for all the Oreo lovers out there. While the celebration is mostly made up of a new marketing campaign featuring the slogan, “Celebrate the kid inside,” there is also an edible way to participate in the Oreo celebration. Kraft Foods created a limited-edition cookie called the Birthday Cake Oreo. From the outside these special cookies look like the classic Oreo, but when consumers twists open the cookie, they will find frosting speckled with colored sprinkles.