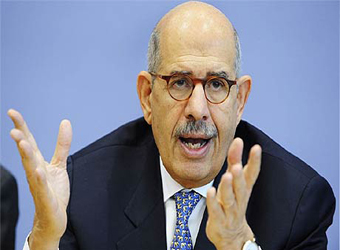 During the parliament session, a group of MPs demanded the revocation of Baradei’s citizenship, while other members disapproved these demands, stressing that the request should not be based on personal interests.

The demands came after a Television presenter on Egypt’s Sada El-Balad channel Ahmed Moussa, who is known for leaking personal recordings of revolutionary activists and politicians, leaked purported recordings of two of El-Baradei’s phone calls.

The first call was in March 2011 with Sami Anan, who was then army chief of staff, where he demanded on behalf of protesters the resignation of the cabinet of prime minister Ahmed Shafiq, Mubarak’s last appointed prime minister.

The second leak was an alleged personal phone call between El-Baradei and his brother Ali El-Baradei, in which the two discussed how the veteran politician was dealing with the Revolutionary Youth Coalition.

Moussa, known for his strong pro-government voice, did not disclose how he obtained the recordings.

Last Saturday, El-Baradei made his first media appearance since his resignation, hinting at a return to Egyptian politics after three years of “distancing” himself.

On a similar note, Egyptian law-maker Mostafa Bakry presented on Monday an official letter to parliament speaker Ali Abdel-Aal demanding that the nationality of Egypt’s former vice president Mohamed El-Baradei be revoked for “inciting against the Egyptian nation”, according to Ahram Online.

Bakry accused the Nobel laureate of “playing a dangerous role in inciting against Egypt and defaming its state institutions before international organisations and entities”. He also demanded the withdrawal of Egypt’s highest Order of the Nile decoration which El-Baradei received in 2006.

The MP also presented documents and videos with the letter, saying that the evidence contained therein would require the withdrawal of Egyptian citizenship from.

He stressed that the role of the House of Representatives is to contribute to protecting the homeland، stressing that the Council has the right to revoke El-Baradei’s citizenship.

El-Baradei was the Director-General of the International Atomic Energy Agency (IAEA), an intergovernmental organisation that seeks to inhibit the use of nuclear energy for military purposes. He received the Nobel Peace Prize in 2005 and Egypt’ s Order of the Nile decoration in 2006.

In 2010 he co-founded the National Association for Change, a group of opposition powers demanding political and democratic reforms in Egypt.

El-Baradei lived between Egypt and several European capitals before returning to the country in the wake of the 2011 revolution which toppled the former president Hosni Mubarak.

During the rule of former president Mohamed Morsi, El-Baradei co-founded the National Front for Salvation, consisting of more than 35 groups opposed to the regime of the Islamist president.

Following the ousting of Morsi by a popular uprising in July 2013, El-Baradei served as interim Vice President of Egypt. He resigned after security forces forcibly dispersed protest camps set up by Morsi supporters in August 2013.