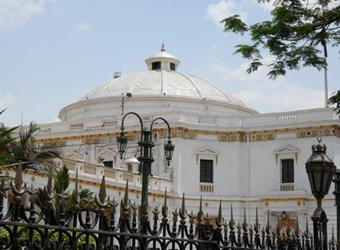 A number of Egypt MPs revealed on Saturday that at least four parliamentary committees will be tasked with discussing a controversial Egyptian-Saudi Red Sea border re-demarcation deal and preparing a report on the matter.

On 8 April, during a visit by King Salman Abdulaziz of Saudi Arabia to Cairo, the governments of Egypt and Saudi Arabia signed a re-demarcation border deal which placed the two Red Sea islands of Tiran and Sanafir in Saudi territorial waters.

Egyptian government officials have since argued that the islands were never Egyptian but merely placed under the country’s sovereignty temporarily, and have produced documents that support their case.

The deal was challenged in court by opponents, including well-known lawyers Khaled Ali and Malek Adly, who produced documents countering the government’s, and an administrative court nullified the deal in June.

The government appealed the verdict, and a final judgement is expected from a higher administrative court on 16 January.

Despite this, the cabinet on Thursday approved the deal and said it would be referred to parliament for discussion and ratification.

The deal was referred to parliament on Saturday.

“As far as I know, speaker [Ali] Abdel-Aal has also decided that a number of high-profile international law experts such as former minister Moufid Shehab, be invited to give their say on the deal,” said Bakri.

He also indicated that Abdel-Aal might form a fact-finding committee to investigate the different aspects of the deal.

“I also expect that MPs will be officially informed of the cabinet’s decision [to approve the deal] when parliament holds a plenary session on Monday,” said Bakri.

“The Egyptian-Saudi border demarcation deal should take a long time in terms of discussion in parliament,” he said. “MPs should carefully review all kinds of documents before they give a final vote on whether the two Red Sea islands of Tiran and Sanafir are Saudi,” he added.

Bakri also argued that parliament’s discussion of the Egyptian-Saudi deal is in line with the constitution.

“Article 151 is clear in that it allows the president of the republic to represent the country in matters of foreign relations, sign agreements, and finally ratify them only after they are approved by parliament,” he said.

Mohamed Abu Hamed, an independent MP, also told reporters that officials from the foreign ministry, the armed forces, and the general intelligence apparatus will be invited to give their say on the Egyptian-Saudi agreement.

Abu Hamed said he had just finished reading a number of international documents “which all agree that the two Red Sea islands of Tiran and Sanafir should be affiliated with Saudi Arabia.”

“But this does not mean that this will be my final decision, and we – MPs – hope that all those who hold internationally recognised documents which might say the two islands are Egyptian come and present their documents to parliament,” said Hamed.

Bahaaeddin Abu Shoqa, the head of parliament’s Legislative and Constitutional Affairs Committee, also told reporters Saturday that “the cabinet’s decision to refer the Egyptian-Saudi Red Sea demarcation deal to parliament goes in line with the constitution.”

“The deal goes in line with Article 151 of the constitution, and our role as a committee is to make sure that this deal does not negatively affect Egypt’s sovereignty in any way or lead Egypt to cede part of its territory,” said Abu Shoqa.

The second paragraph of Article 151 states that reconciliation, alliance and sovereignty agreements should be put to a public referendum, and in all circumstances agreements which violate the constitution or lead the country to cede part of its territory must be ruled out.

Other MPs such as Margaret Azer told reporters that “the Egyptian-Saudi border demarcation deal should have been referred to parliament a long time ago.”

“It is wrong that the government took too much time to decide that this deal be referred to parliament, thus opening the door for lawyers to take it to courts and make the issue more complicated,” said Azer.

The leftist “25-30” parliamentary bloc, however, denounced the cabinet’s decision to refer the deal with Saudi Arabia to parliament.

“We strongly denounce and reject the cabinet’s decision upon the grounds that the deal was signed a long time ago, not to mention that the courts have not yet issued a final verdict on it,” said a bloc statement.

The cabinet should wait until a final verdict on the Egyptian-Saudi deal is issued by the Supreme Administrative Court, the bloc argued.

“It goes with both logic and the constitution that the government should refrain from referring international agreements to parliament as long as they are being deliberated by the judiciary,” read the statement.

“A final verdict from the High Administrative Court should take us to the next step – that it is referred to parliament for discussion and voting,” said the statement.

“if a majority of two-thirds of MPs vote in favour of ceding the islands of Tiran and Sanafir to Saudi Arabia, the next step should be putting the deal to a public referendum in line with Article 151 of the constitution,” argued the leftist MPs.

The bloc’s statement also posited that the Saudis should provide all the documents needed to conclude that the two Red Sea islands are theirs.

“We are surprised that the Egyptian government is the one which is doing its best to prove that the two Red Sea islands are Saudi’s and we believe that this position will put it in confrontation with the Egyptian people,” the statement said.

Samir Ghattas, another leftist MP, also issued a statement on Saturday, insisting that the cabinet’s decision to refer the Egyptian-Saud border deal to parliament contravenes the constitution.

“Egypt’s parliaments have a glorious history of rejecting shameful agreements such as the extension of Great Britain’s Suez Canal Company’s concession in 1910 and the Anglo-Egyptian treaty of 1936 in 1951,” said Ghattas, arguing that “these two parliaments stood against ceding any part of Egypt’s land or sovereignty and the current parliament should do the same.”

Mohamed El-Sewedy, head of the”Support Egypt” bloc, told reporters that the Egyptian-Saudi deal will be reviewed by both the bloc’s experts and parliament’s committees.

“The parliament is constitutionally authorised to discuss the different aspects of this deal, take its time and then put it to a final vote,” said El-Sewedy, adding that “the documents are what will decide whether the two islands are Saudi.”