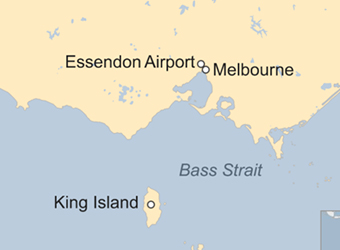 An Australian pilot who died in a Melbourne plane crash had been investigated before over a “near collision” in 2015, say officials.

Police said the charter flight appeared to have had a “catastrophic engine failure” shortly after take-off.

The head of the national transport safety board has said they won’t be participating in any speculation.

Quartermain, an experienced pilot, had just taken off from Melbourne’s small Essendon Airport on Tuesday when he issued two mayday calls.

Moments later, his Beechcraft B200 King Air crashed into a Direct Factory Outlets (DFO) shopping centre, killing himself and his four US passengers. Nobody on the ground was hurt.

Aviation authorities said Quartermain had been investigated over the earlier incident in September 2015.

His plane came within 1.8km (1.1 miles) horizontally and 90m (300ft) vertically of another plane at Mt Hotham, a ski resort in Victoria state, amid bad weather.

The Australian Transport Safety Bureau (ATSB) described it as a “serious incident” in a summary online – which does not name Quartermain – but its final report will not be released until May.

According the ATSB summary, the plane had “tracking difficulties” approaching Mt Hotham before being “observed to carry out significant manoeuvring” ahead of landing.

“Following the incident at Mt Hotham, the Civil Aviation Safety Authority (CASA) required the pilot to undergo some additional proficiency checks. They were done, the pilot passed those checks,” a CASA spokesman told the Australian Broadcasting Corporation.

“And in subsequent checks done prior to yesterday’s flight… the pilot has passed all of those.”

ATSB chief commissioner Greg Hood said the Mt Hotham incident would form part of the new investigation, but that “as Australia’s no-blame transport safety investigator we won’t be participating in any speculation”.

Quartermain had more than 38 years of flying experience, according to the website of charter company Corporate and Leisure Aviation, which he owned with his wife, Cilla.

His friends have described him as a true gentleman who was highly respected within aviation circles.

“He gave me my start as a young pilot,” fellow aviator Peter Matthew told The Age. “He was very honest, a very reliable person. Nothing ever got him down.”

Michael Innes said he had flown with Quartermain more than 30 times.

“A wonderful person and one of Victoria’s most experienced charter pilots,” he told the Herald Sun.

The plane was bound for Tasmania’s King Island, where the US men planned to play golf.

The US embassy in Canberra has confirmed that the four passengers on the plane were U.S. citizens.

White House spokesman Sean Spicer said “the president’s thoughts and prayers are with the families of the victims and the U.S. embassy and consulate are ready to provide necessary and appropriate assistance”.

The 70-year-old from Texas was identified on social media by his sister, Denelle Wicht, who posted tributes to her “handsome athletic big brother”.

She said he was killed in the accident while on a once in a lifetime trip to Australia.

Wicht added that De Haven, reported to be a retired FBI agent, was travelling to King Island to play golf.

Munsch was identified in a Facebook post by his cousin, Carol Holst. She confirmed that “Russ was killed in a plane crash in Australia,” and advised friends to hug your loved ones, you never know.

Munsch, 62, was a founding partner with the law firm Munsch Hardt, which was established in 1985 and opened an office in Austin in 1996. He specialised in bankruptcy and commercial law.

Garland was identified by Australian media as the retired founder of an energy consulting company, CLEAResult.

He had frequently spoken on Facebook about enjoying the group’s golfing tour. Pictures showed his wife, Laurie, had also joined them on occasions.

After a taking one flight in New Zealand, he wrote: “I only burned 5000 calories of anxiety on the flight over. I’m not so much on those smaller planes even though we had a great pilot.”

The fourth victim is yet to be formally identified.