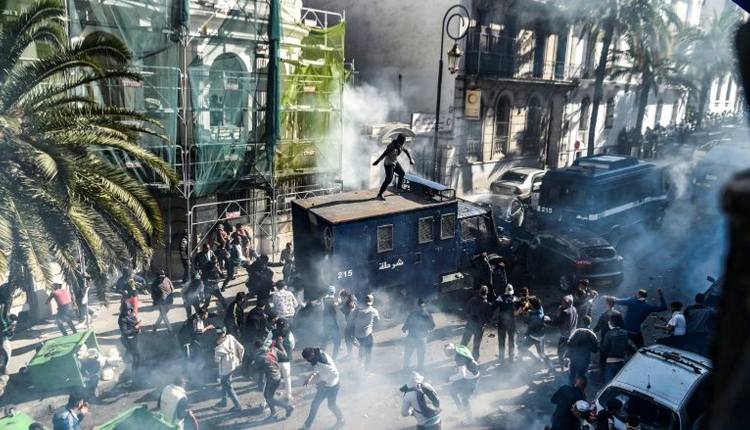 Police and protesters have clashed in Algeria as marches against the ruling elite show no sign of ending.

Police used water cannon and tear gas in the capital Algiers as demonstrators called for the removal of new interim President Abdelkader Bensalah.

Largely peaceful protests have been held every Friday in cities across Algeria for the past two months.

Police arrested 108 “infiltrators” towards end of the march after 27 officers were injured, officials say.

Former leader Abdelaziz Bouteflika resigned last week. He was replaced by Mr Bensalah, who has pledged to hold free elections on 4 July but many see him as too close to the former president.

Hundreds of thousands reportedly marched in Algiers on Friday, many chanting “No to Bensalah” and using the slogan “They will all leave” on social media.

Mr Bensalah will be in office for a 90-day period as set out by the constitution and is barred from running in the upcoming poll, but demonstrators are still demanding his resignation.

What do protesters want?

Protests started in February with anger focused on the country’s ruling elite, not just Mr Bouteflika,

Placards and online posts have been demanding an end to “le pouvoir”, or the establishment.

About 70% of the country’s population is under 30, and youth unemployment is high.

In a televised speech, he cautioned protesters about demands that could undermine the country’s constitution.

He also said the judiciary should investigate “the whole gang” – a term used for the former president’s inner circle.

Mr Bouteflika was considered by many as being a front for a group of businessmen, politicians and military officials who were said to really control the country.

Protests so far have largely been peaceful, although tear gas and water cannon were used by security forces on Tuesday and Wednesday.