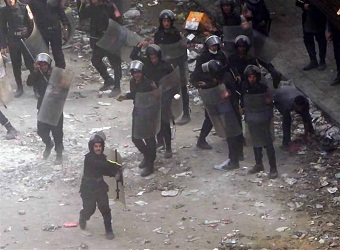 Egyptian police killed two fugitives in a shootout after raiding their hideout in Badr city on the outskirts of Cairo, the interior ministry said on Sunday.

The ministry said in a statement that security forces were pursuing one of the two fugitives who was sentenced to life in prison by a military court after being convicted of planting an explosive device at a police station in Assiut governorate in Upper Egypt.

The suspect was also accused in two ongoing cases involving planting an explosive device and being a member of a terrorist group.

The ministry said that the two suspects fired on police as they closed in on their hideout, leading to a shootout.

“The fugitive suspect was planning an attack against vital and important targets,” the statement concluded.