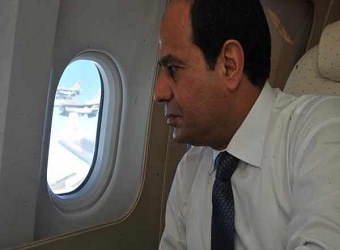 The President of Egypt, Field Marshal Abdel Fattah el-Sisi, who is currently on an official visit to the country, today visited the Sheikh Zayed Grand Mosque.

During the tour, he was accompanied by Dr. Sultan bin Ahmed Al Jaber, Minister of State and Chairman of Mission of Honour, and Mohammed bin Nakhaira Al Dhahiri, the UAE’s Ambassador to Egypt.

Sisi began his tour with a visit to the tomb of the late Sheikh Zayed bin Sultan al Nahyan, where he read al Fateh over the tomb, and briefed on the legacy of Sheikh Zayed that had enriched the culture of tolerance and co-existence.

At the conclusion of the tour, the Director-General of the Zayed Grand Mosque Centre, Yousif al-Obaidli, presented copies of books published by the centre to the guest.

The Egyptian President, upon the conclusion of his visit, wrote in the guestbook of the Mosque, “I have the pleasure to visit this great Mosque, whose foundation was laid by the late Sheikh Zayed bin Sultan Al Nahyan.” He praised the architectural and decorative designs of this large edifice, and the prominent cultural role that it plays in Abu Dhabi and the region.