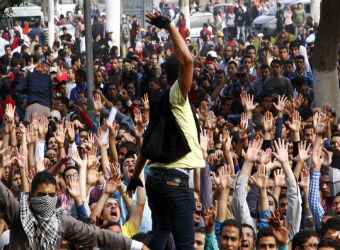 Student unions organised protests and rallies at different universities across the country on Sunday, an effort that was in spirit with those at Cairo University.

An engineering student union at Ain Shams University in Cairo organised a rally in solidarity with Mohamed Reda, the Cairo University student who was killed in clashes with security forces last Thursday. Students from the Faculty of Engineering also held a strike last week during midterm examinations, demanding the release of two of its students that had been arrested during the clashes.

Protests and rallies continued at Cairo’s Al-Azhar University, which has been rocked by student unrest since the beginning of the academic year.

The protesters made demands regarding the recent expulsion and arrest of students and colleagues in recent weeks. However, the focus of the Al-Azhar students’ rage was a recent court ruling against 14 pro-Morsi female protesters in Alexandria, who were given up to 11 years in jail. The sentence has been widely criticised as excessive.

The fate of the young women was also the focus in Alexandria, with hundreds of pro-Muslim Brotherhood supporters continuing their protests for the second week in row.

A strike was also called by students from the Faculty of Engineering in Beni Suef, Upper Egypt. In support with those from Cairo University, the students called for the retribution of the “martyrs’ killers,” as well as the release of detained students.

Clashes broke out briefly at Assiut University when a pro-Brotherhood protest was challenged by supporters of Defence Minister Abdel-Fattah El-Sisi. The pro-Brotherhood students chanted slogans against the military and police.

In Minya governorate, Upper Egypt, students from the April 6 Youth Movement and Constitution Party protested in solidarity with those from Cairo University, demanding the dismissal of the Minister of Higher Education, Hossam Eissa, and retribution for slain student Mohamed Reda. Eissa denied that security forces used birdshot inside the campus.

Protests and rallies were also held by students at private universities. The student union at the American University in Cairo organised a one-hour rally in support of the Faculty of Engineering students at Cairo University.

At Ahram Canadian University, pro-Brotherhood students turned out in support of the 14 female protesters in Alexandria.